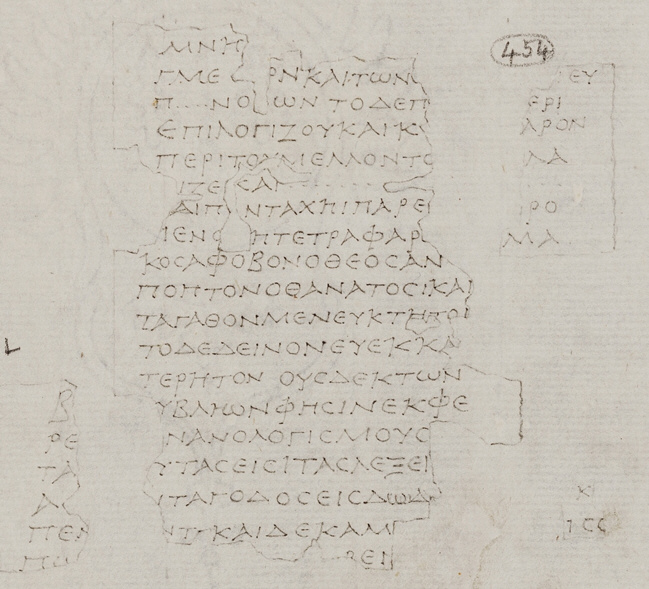 This post is the second of several on particular research projects I want to pursue. I will appreciate it greatly if anyone who has any comment or suggestion emails me here or via Facebook.  Here is the second installment:

The “tetrapharmakos” is a four-line condensation of the first four key doctrines based on the deciphering of a scroll found at Herculaneum (per Wikipedia).  The standard English translation found on the internet is:

Don’t fear god,
Don’t worry about death;
What is good is easy to get, and
What is terrible is easy to endure.

This version is sourced to the Epicurus Reader, page vi. In my copy of that work, the page shows the same text quoted above, with a cite to papyrus 1005, 4.9-14.  An image of that papyrus can be found here, and is shown below.

So far I have not found any discussion of the translation process in The Epicurus Reader, so it is not clear to me whether Inwood or Gerson (who are listed as translators) or Hutchinson (who did the intro) are responsible for the English summary.  In my last post (on Key Doctrine 6) I noted that  the Epicurus Reader has a translation of Key Doctrine 6 that diverges significantly from that of other authorities.  Thus I am curious about the context of this translation of the Tetrapharmakos.  We know that the editors state that the Greek original reads:

The page from which this text comes is fragmentary, and part of a longer passage, as can be seen in this image: 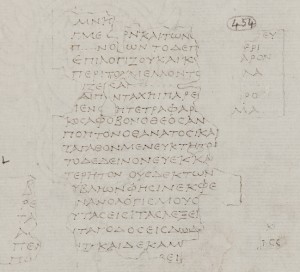 The challenge that immediately arises is that we can quickly observe that while “Don’t Fear God” is certainly one meaning that can be derived from the full text of the first Doctrine, it is certainly not the only meaning, and it is arguably not the most important.  I would argue that regardless of whether God is to be “feared,” it is at least as important for us to know that God does not concern himself with men’s affairs at all.   As a result, regardless of whether we fear god or love him, god does not control or doom us to a particular “fate.”

I am informed that by a number of readers who know Greek that the translation is probably accurate, and at least as to these four lines (but not the context) we have the full text.  Thus the question to keep in mind in researching this is largely the context in which it was written.  There is probably much we could learn from Philodemus’ thought process if we knew the context in which he (or the writer from which he might be quoting) reduced the first four key doctrines to these brief lines.