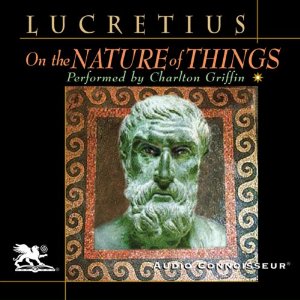 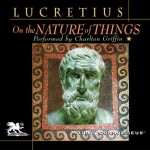 Peace and Safety to the Epicureans among us, no matter where you might be!

Before this month is over, author Stephen Greenblatt will be releasing his new book on Lucretius entitled  “The Swerve.”  We’ll be covering that release here at this blog, but in the meantime I’d like to remind all fans of Epicurus of one of the most useful tools for the study of Lucretius:  Charlton Griffin’s audiobook recording of the unabridged translation by Rolfe Humphries, available at Amazon.com and Audible.com.  I also recommend the printed version of Humphries’ translation, entitled “The Way Things Are,” but it is in the audio performance by Griffin that the Epicurean message really shines through.  If you are serious student of Epicurus you owe yourself the treat of burning Griffin’s version into your mind.

In my own experience, the poetical versions of De Rerum Natura are too foreign for the untrained reader to follow — most translators into English have spent so much effort composing new material to create and English rhyme out of the Latin text that the meaning gets buried too deeply for anyone who does not already understand the message that Lucretius was communicating.  Part of the beauty of this Griffin version is that it is based on Rolfe Humphries translated the poem into “free verse,” and there is no artificial rhyme to spoil the meaning.  But even more important than the text is Griffin’s delivery.  I have no clue much study of Epicureanism Griffin did before recording this version, but he delivers the material with such precision and forcefulness that you would think Lucretius himself were delivering it!   The artificial  barriers of rhyming and punctuation drop away as if by magic, and it is easy to imagine that you are standing in the halls of the Villa of the Papyri in Herculaneum two thousand years ago listening to Philodemus or Lucretius himself deliver the message.

It’s too early to know what to expect from the upcoming “Swerve,” but if you have never listened to Griffin’s version, be sure to add that to your t0-d0 list!