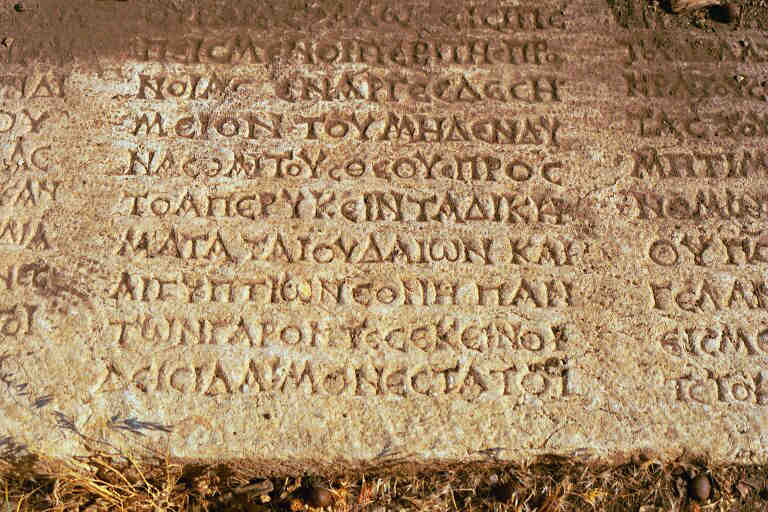 Many philosophers (particularly Stoics) assert that virtues are ends in themselves. They assert – in the classic phrase – that “virtue is its own reward.”

This position is a direct rejection of the Epicurean position that Nature has set the faculty of pleasure as the goal of living.  For today’s post let’s check back with the Inscription of Diogenes of Oinoanda, as translated by Martin Ferguson Smith, and look at a passage that is not often highlighted:

Suppose, then, someone were to ask someone, though it is a naive question, «who is it whom these virtues benefit?», obviously the answer will be «man.» The virtues certainly do not make provision for these birds flying past, enabling them to fly well, or for each of the other animals: they do not desert the nature with which they live and by which they have been engendered; rather it is for the sake of this nature that the virtues do everything and exist.

This is the central ethical observation of Epicurean philosophy.  “Virtues” are like hammers and screwdrivers – tools for the accomplishment of a goal.  To assert that a hammer or a screwdriver is an end in itself – no matter how finely made or beautifully cast the hammer or screwdriver might be – is an absurdity.   And yet that is just what generations of orthodox philosophers have foisted on the world as sublime wisdom.

Epicurus held that for the word “virtue” to have any real meaning whatsoever, it must be seen as an attribute that arises from the nature of the living being which is being considered.  And because the fundamental nature or each living being is for that being to pursue pleasurable living, it is this goal, “it is for the sake of this nature, that the virtues do everything and exist.”

This point cannot be emphasized strongly enough, and that is why Diogenes of Oinoanda tells us that his inscription, and indeed Epicurean philosophy itself, is a shout-out to the world to recognize that pleasure – and not meaningless abstraction – is the guide of life:

If, gentlemen, the point at issue between these people and us involved inquiry into «what is the means of happiness?» and they wanted to say «the virtues» (which would actually be true), it would be unnecessary to take any other step than to agree with them about this, without more ado. But since, as I say, the issue is not «what is the means of happiness?» but «what is happiness and what is the ultimate goal of our nature?», I say both now and always, shouting out loudly to all Greeks and non-Greeks, that pleasure is the end of the best mode of life, while the virtues, which are inopportunely messed about by these people (being transferred from the place of the means to that of the end), are in no way an end, but the means to the end.

Previous ArticleUnwinding A Confusion About the Faculty of Pleasure By Considering the Nature of Money
Next ArticleThings That Never Change, And Things That Do