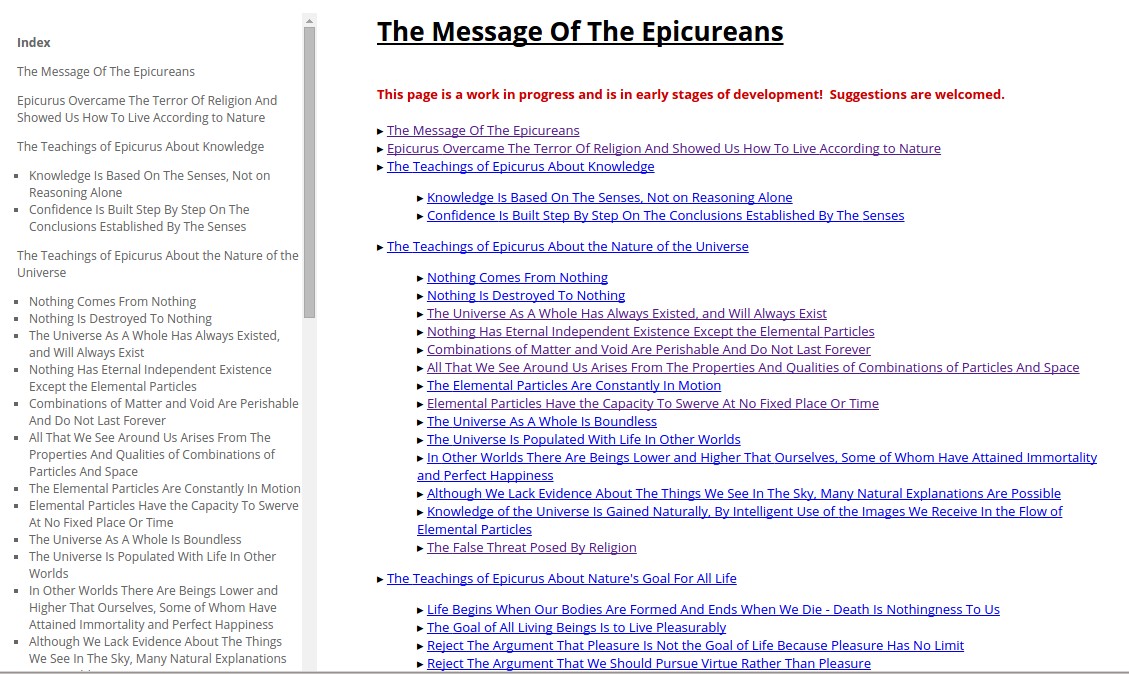 The opening of Epicurus’ letter to Herodotus:

For those who are unable to study carefully all my physical writings or to go into the longer treatises at all, I have myself prepared an epitome of the whole system, Herodotus, to preserve in the memory enough of the principal doctrines, to the end that on every occasion they may be able to aid themselves on the most important points, so far as they take up the study of Physics. Those who have made some advance in the survey of the entire system ought to fix in their minds under the principal headings an elementary outline of the whole treatment of the subject. For a comprehensive view is often required, the details but seldom.

To the former, then—the main heads—we must continually return, and must memorize them so far as to get a valid conception of the facts, as well as the means of discovering all the details exactly when once the general outlines are rightly understood and remembered; since it is the privilege of the mature student to make a ready use of his conceptions by referring every one of them to elementary facts and simple terms. For it is impossible to gather up the results of continuous diligent study of the entirety of things, unless we can embrace in short formulas and hold in mind all that might have been accurately expressed even to the minutest detail.

From the time I saw Thomas Jefferson’s outline of Epicurean thought, and read the above words of Epicurus, I have considered it a central part of my Epicurean studies to produce my own outlines of the most important points.

Early last year, I made a central focus of the NewEpicurean web page an outline that I prepared by selecting key passages from the core texts and rearranging them in a logical progression.  That outline, including an audio reading of them, is here.

Later last year, I decided to produce an outline in another format that would contain both the logical progression as well as a list of the sources on which the progression was based.  That outline, in collapsible text format, is here.

This year, I am working to take these prior outlines and produce from them a modernized rendering of these same points.  I will keep as closely as possible to the progression of thought contained in the earlier outlines, because I think the logical order of the progression is almost as important as the components themselves.  When I produced my first outline, however, which I still consider to be the most important, I tried to stay as closely as possible to the wording as found in the Bailey, Munro, and other key translations.  There is considerable controversy as to the meaning and implications of many passages, and I think it is best to drill back as close to the original sources as possible to keep things honest.

The tradeoff in staying so close to the translations, however, is that the wording seems artificial to modern readers, and the point often gets lost in the archaic manner of expression.

So my next step in summarizing the philosophy of Epicurus is to take the ancient pattern and update it in modern language.  I’ve only just begun to get started with this, but I have prepared the raw outline and adopted a new program format which will allow the easy incorporation of graphics and hyperlinks as the work proceeds.  For now, the work is going on here at this link:  http://newepicurean.com/message/The_Message_Of_The_Epicureans.html  You can also find it at the shorter Newepicurean.com/message, but linked in that way the initial text does not appear until you click the first item in the index.

At this point the page is still in very raw outline form, and I do not even have the broad reference notes that are included on each line of the Foundations outline.   But this format seems to me to be the logical next step, with the outline index on the right serving as the briefest summary, then the text of each item containing the key points, which are themselves linked to the specific texts supporting the main statements.

I have much work to do before this is turned into something valuable, but even at this early stage I think the outline may be of help to some, so I am releasing it now.  Many updates are ahead, and if anyone has suggestions for changes in the outline or supporting sources, please let me know. 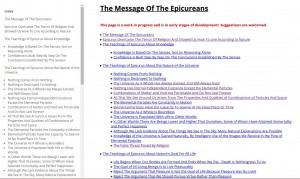 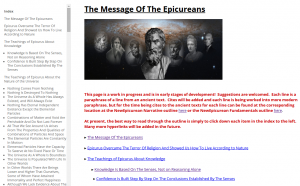 Previous ArticlePeace and Safety For Your Twentieth of January – The Limits of Education And the Need to Be “Well Constituted”
Next ArticleDiscussion Forum Update – EpicureanFriends.com