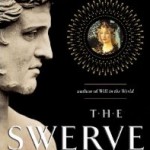 Thanks To Stefan at www.stress-freedom.net for the info that a major new book is about to be released about Lucretius and De Rerum Natura / On The Nature of Things.   Author Stephen Greenblatt is releasing “The Swerve” on September 26, 2011, according to Amazon.   Amazon’s description reads:

A riveting tale of the great cultural “swerve” known as the Renaissance.

One of the world’s most celebrated scholars, Stephen Greenblatt has crafted both an innovative work of history and a thrilling story of discovery, in which one manuscript, plucked from a thousand years of neglect, changed the course of human thought and made possible the world as we know it.

Nearly six hundred years ago, a short, genial, cannily alert man in his late thirties took a very old manuscript off a library shelf, saw with excitement what he had discovered, and ordered that it be copied. That book was the last surviving manuscript of an ancient Roman philosophical epic, On the Nature of Things, by Lucretius—a beautiful poem of the most dangerous ideas: that the universe functioned without the aid of gods, that religious fear was damaging to human life, and that matter was made up of very small particles in eternal motion, colliding and swerving in new directions.

The copying and translation of this ancient book-the greatest discovery of the greatest book-hunter of his age-fueled the Renaissance, inspiring artists such as Botticelli and thinkers such as Giordano Bruno; shaped the thought of Galileo and Freud, Darwin and Einstein; and had a revolutionary influence on writers such as Montaigne and Shakespeare and even Thomas Jefferson. 16 pages full-color illustrations.

We’ll certainly be covering more on this book at this blog as we obtain a copy!  Currently there is an article at Harvard Magazine, and  in the New Yorker with a podcast interview with the author.

Looks like great opportunities are ahead for all fans of Epicurus to post comments to web pages and otherwise use the event of this new book to spread the word about Epicurus and his devoted poet Lucretius!

Previous ArticleA New Ebook – An Introduction to the Nature of Things
Next ArticlePeace and Safety For Your Twentieth of September! – A listening suggestion.