[Update 06/02/18:  See the reference at the end of this article to the 1743 Daniel Browne edition, which I believe gets this right.  The correct word is simply “events.”]

Here is a word issue that has troubled me for a long time.  One of the most important sections of Lucretius (near Book 1, line 424) deals with the nature of combinations of elemental properties, which Lucretius divides into two categories.  The first category is “properties,” which Lucretius defines as that “which can in no case be disjoined and separated without utter destruction accompanying the severance, such as the weight of a stone, the heat of fire, the fluidity of water.”  (all translations here are Munro).   The second category is given a name in English which I find inappropriate – it is translated as “accident” by Munro, by Bailey, and by Martin Ferguson Smith.  These “accidents” are defined as “things which may come and go while the nature of the thing remains unharmed.”

Here is a clip of the passage describing this:

Subtleties of definitions of words is very personal to the background of the speaker and hearer, but in my own case I come from a background in which “accidental” necessarily implies “fortuitous,” which implies happening by chance, as in lucky, or unlucky, or some work of “fortune.”  It concerns me that many English-speakers reading this section of Lucretius may also be reading the same implication, and I don’t think that is what Lucretius intends.

Here is the Latin of the key part of the passage, again from Munro, and it appears to my non-expert eye that the Latin word being used is “eventa” (eventus -us m. [consequence , issue, result; event, occurrence, experience]):

I have not had time before writing this post to look for other passages in Lucretius, nor have I done a detailed study of “eventa” in Latin.  Also, I want to check this discussion by earlier texts in Greek, especially the letter to Herodotus.  If others have access to information that would help with this discussion, I would appreciate their comment.

But until I see other evidence to the contrary, I would suggest that the meaning that Lucretius is conveying here has nothing to do chance, fortune, or luck.  I would go further to suggest that it is a major reversal of meaning to suggest that “luck” has any necessary connection with the qualities that are being described as “things which may come and go while the nature of the thing remains unharmed.”

I suggest that what is being conveyed here is that the qualities of bodies are not “accidental,” or even “incidental” as I have sometimes heard used.  Rather, what Lucretius is saying here is that the qualities of bodies are CONTEXTIDENTAL (to coin a word, if it does not yet exist.)  In other words, the attributes that we observe in objects that come and go while the nature of the thing remains unharmed are determined by the CONTEXT.  The attribute is determined by the circumstances that exist at the time that we observe the attribute to exist, including the body itself, the conditions under which we observe it, and the process of our observing it.

The key point that I think deserves to be made is that if we interpret the Epicurean position to be that the major two categories of attributes of a thing are (1) unchanging properties, and (2) things that are “lucky” or “fortunate” or the result of “chance,” then we are missing the main point in a major way.  Epicurean physics replaces the laws of God with the laws of Nature – all properties and qualities of bodies arise from the nature of the elements of which they are composed, and the context in which they are assembled.  The qualities that result from the combinations of the elements are most certainly not CHANCE but in fact the opposite – they are necessarily determine by the nature of the elements which have come together at a particular time, at a particular place, and in a particular way.

The word “contextual” fills the need for most discussion of this issue, and I think properly conveys was Lucretius was intending.  We can say that the weight of stone is a property, and the color of a stone is contextual.  But as to the words used to describe the categories themselves, the word “contextual” is an adjective, while “property” is a noun.  I would suggest that, for those of us who are concerned that “accident” and “accidental” implies fortuity,  – that it is confusing at best and erroneous at worst to refer to “properties and accidents.”  Maybe there is a better word, but until a better noun comes along, I will try out “accidents and contextidents.” 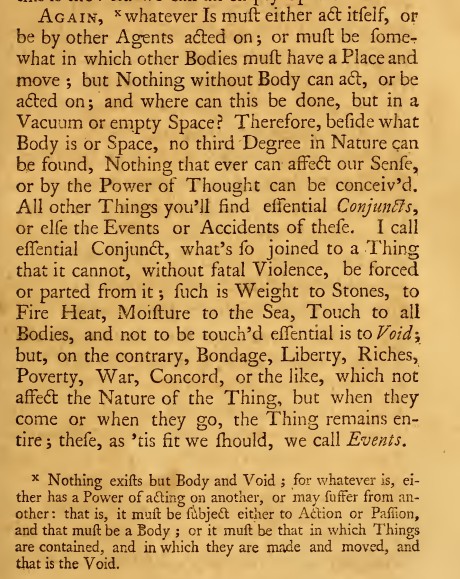 Previous ArticleIn Life, There Is No Antidote to Pain But Pleasure
Next ArticleAn Invitation To An Epicurean 25th