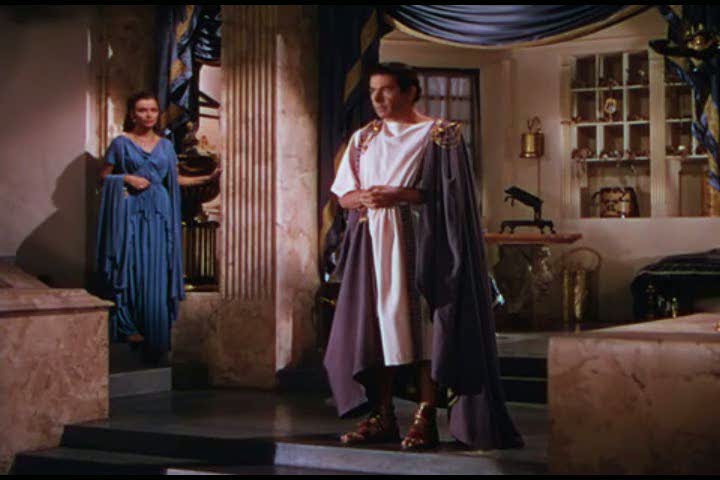 Hollywood rarely portrays Epicurean characters fairly, but the attached video clip from 1951’s Quo Vadis is one such an example, and in it we can find a useful portrayal of two major Epicurean themes.

As we arrive at this scene in the movie, Nero has just burned Rome, and the Epicurean Petronius is lamenting his missed opportunity to step forward into public life and lead the mob to depose the deranged emperor.  Thus the first core Epicurean issue Petronius confronts is the question of how much to participate in politics when one’s life and happiness appear to demand it.

The scene from this clip was set to make the screenwriter’s point of the supposed decadence of leading Romans in general, and Epicureans in particular, so it is probably not fair to second-guess the course Petronius chooses here.  Without the background facts that would allow us to see whether a different course was possible, and the likelihood of its success, we do not have a clear view from which to evaluate Petronius’ decisions.  Nevertheless, the scene is a moving portrayal of the evaluation of public life in Epicurean terms.

The second segment of this clip portrays another core Epicurean issue:  the principle that, if we are to live happily according to Nature, we must keep control over our own lives.   Epicurus repeatedly warned against giving in to false ideas of “fate,” regardless of the circumstances — reminding us that even in the darkest time we can voluntarily and properly choose suicide if the occasion warrants.  This is a theme that is rarely discussed today, but it is a critical one to consider and to be prepared to act on according to individual circumstances.

I do not recall that the movie version of Quo Vadis refers to Epicurus, but the original book version explicitly states that the Petronius character was an Epicurean.  In that spirit, the movie directors did a great job of decorating Petronius’ “office,” including on his desk a replica of the Herculaneum pig from the House of the Papyrii, which recalls Horace’s words that Epicureans are “hogs in Epicurus’ herd!”  Some of the dialogue (such as the discussion at the end about what Christians believe) is notably un-Epicurean, but all in all the Petronius character provides an interesting portrayal of Epicurean attitudes. 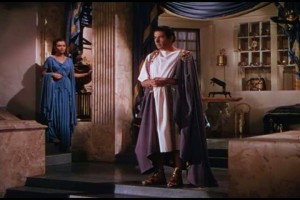