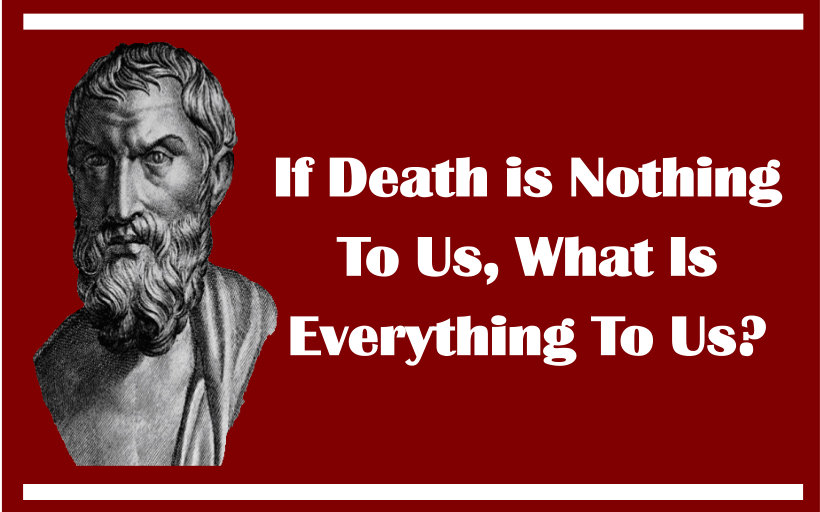 Subtitled: “Why We Must Fight For Joy And Delight.”

It is easy to conclude that “life” is what we should think of in contrast to death, and no doubt there is much truth in that.  But Epicurus does not state that equivalence explicitly, and I think it is important to think about why.  What he does state explicitly is that death is a state where all sensations are absent.

Does this mean that Epicurus considered it to be sufficient to define death as a state without hearing, seeing, touching, tasting, or smelling?  I don’t think so – because in sleep we are not actively exercising those sensations, and yet we are clearly not dead.  It also seems likely that Epicurus would have realized what we do – that sleep can be dreamless, and therefore also without even semi-conscious mental activity.  If katastematic pleasure means anything, however, and I think it does – we would probably classify the state of dreamless sleep to be one of those activities in which we experience katastematic pleasure.  That is because even in a state of dreamless sleep, so long as we are alive and without pain, we can consider ourselves to be experiencing the abiding pleasure of being alive.

But the real focus of Doctrine Two, and the explicit wording, is sensation.    Epicurus is emphasizing that life is a series of sensations from birth to death.  And what is it that makes any sensation worth being alive to experience?  Pleasure.  Life is an activity comprised of a series of sensations that continues so long as we live.  And the reason we engage in any activity, the reason for the existence of sensation itself, is for the active experience of pleasure.  The active experience of pleasure includes pleasure of both body and mind.  Epicurus has stated clearly that no pleasure is a bad thing in itself – some pleasures are to be avoided, but only because they bring with them an excess of pain that offsets the pleasure.  It is important also to note that while every pleasure is pleasing – both mental and physical – mental pleasures can be more intense than physical pleasures:

“Yet we maintain that this does not preclude mental pleasures and pains from being much more intense than those of the body; since the body can feel only what is present to it at the moment, whereas the mind is also cognizant of the past and of the future. For granting that pain of body is equally painful, yet our sensation of pain can be enormously increased by the belief that some evil of unlimited magnitude and duration threatens to befall us hereafter. And the same consideration may be transferred to pleasure: a pleasure is greater if not accompanied by any apprehension of evil. This therefore clearly appears, that intense mental pleasure or distress contributes more to our happiness or misery than a bodily pleasure or pain of equal duration.  (Cicero’s  Torquatus, from On Ends)

All pleasures ultimately relate to the fact that our minds and bodies are composed of atoms (bodies) and void which are constantly in motion.  It is a great mistake – which Cicero tells us even some ancient Epicureans made, and we need to take even greater care to avoid today – to think that there is some static mental state superior to the active experience of pleasure:

“Again, we aver that mental pleasures and pains arise out of bodily ones (and therefore I allow your contention that any Epicureans who think otherwise put themselves out of court; and I am aware that many do, though not those who can speak with authority); but although men do experience mental pleasure that is agreeable and mental pain that is annoying, yet both of these we assert arise out of and are based upon bodily sensations.  (Cicero’s  Torquatus, from On Ends)

[Epicurus] differs from the Cyrenaics with regard to pleasure. They do not include under the term the pleasure which is a state of rest, but only that which consists in motion. Epicurus admits both; also pleasure of mind as well as of body, as he states in his work On Choice and Avoidance and in that On the Ethical End, and in the first book of his work On Human Life and in the epistle to his philosopher friends in Mytilene.

So also Diogenes in the seventeenth book of his Epilecta, and Metrodorus in his Timocrates, whose actual words are: “Thus Pleasure being conceived both as that species which consists in motion and that which is a state of rest.” The words of Epicurus in his work On Choice are : “Peace of mind and freedom from pain are pleasures which imply a state of rest; joy and delight are seen to consist in motion and activity.”

He further disagrees with the Cyrenaics in that they hold that pains of body are worse than mental pains; at all events evil-doers are made to suffer bodily punishment; whereas Epicurus holds the pains of the mind to be the worse; at any rate the flesh endures the storms of the present alone, the mind those of the past and future as well as the present. In this way also he holds mental pleasures to be greater than those of the body.

And as proof that pleasure is the end he adduces the fact that living things, so soon as they are born, are well content with pleasure and are at enmity with pain, by the prompting of nature and apart from reason. Left to our own feelings, then, we shun pain; as when even Heracles, devoured by the poisoned robe, cries aloud,

“And bites and yells, and rock to rock resounds,
Headlands of Locris and Euboean cliffs.”

And we choose the virtues too on account of pleasure and not for their own sake, as we take medicine for the sake of health. So too in the twentieth book of his Epilecta says Diogenes, who also calls education recreation.

As Epicureans,  we should never give up the world of joy and delight to the Stoics.  When we fight for the legitimacy of joy and delight, we fight not only against the Stoics and other false philosophers and religionists in their idolization of pain, but for Nature.  The highest way to follow Nature is to follow intelligently the most elemental commandment Nature has given to us – seek pleasure.