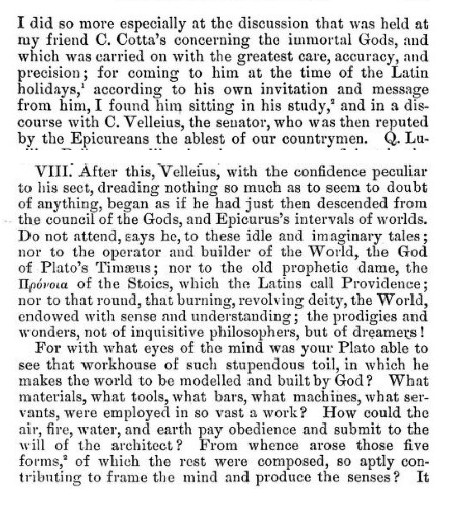 Happy Twentieth of July!  Recent discussions of Epicurean gods provide a great opportunity to review one of the most delightful of the records preserved by Cicero, from his “On The Nature of The Gods.”  Here is confirmation C. Velleius, someone “then reputed by the Epicureans [to be] the ablest of our countrymen” liked to discuss the subject of the gods “with the confidence peculiar to the sect.” Not only that, but “dreading nothing so much as to seem to doubt of anything” and “as if he had just descended from the council of the gods and Epicurus’ intervals of worlds!”

I take that last part to be humorous rather than biting, because we see the same attitude among religious people today who bitterly reject the contentions of modern science that their mystical protectors do not in fact exist.

But whether or not Cicero was in good humor when he wrote this, it’s important for us to take this example to heart and remember that it is supremely important for us to have confidence that we are not the playthings of supernatural gods.  This isn’t a subject about which to shrug our shoulders and say “maybe.” If we were to admit that the stories of the gods might in fact be true, then we would be fools to ignore their threats and rewards.

But based on Epicurean philosophy, however, we can say with confidence that the “fool” shoe is on the other foot.  Here’s just a part – the rest of this passage is here.

Additional discussion of this post and other Epicurean ideas can be found at EpicureanFriends.com.