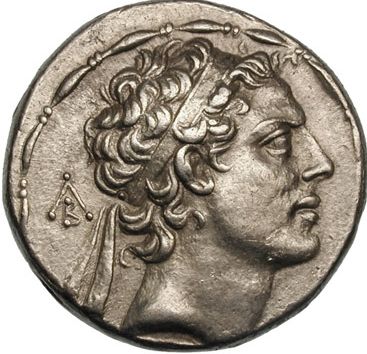 This is the time of year we sometimes hear “Happy Hanukkah,”  so it’s a good time to review the story of Antiochus IV and the close connection of this observation with Epicurean history:

The event giving rise to Hanukkah was battle over the fate of the Temple in Jerusalem, which had fallen into the hands of Hellenistic forces aligned with Antiochus IV.  The significance to Epicureans is that Antiochus IV was disliked by the orthodox Jews at least in part because he favored Epicureanism. The following is from the Jewish Virtual Library:

The transformation of Epicureanism into a competitive sect celebrating Epicurus as “savior” increased the already existing opposition to it. Rhetorical literature falsely accused Epicurus of materialistic hedonism. Complaints of Epicurean dogmatism, “beguiling speech” (Col. 2:4), and compelling argumentation (of Avot 2:14 “…[know] what to answer the Epicurean”) are frequently heard. Rabbinic condemnation reflects knowledge of Greco-Roman rhetoric, experiences with individuals and centers (Gadara, Gaza, Caesarea), and, possibly, the favoritism shown to Epicureanism by *Antiochus Epiphanes and *Hadrian. “Epicurean” became thus a byword for “deviance” – ranging from disrespect to atheism – in Philo, Josephus, and rabbinism alike (see *Apikoros). An early unexpanded version of the “four who entered ‘Paradise'” (Ḥag. 14b) may once have signified Epicurus’ school (“the garden”), since it fits Akiva’s past, Ben Azzai’s celibacy and many Epicurean sayings, Elisha b. Avuyah’s heterodoxy, and Ben Zoma’s gnosticism (Epicureanism and Gnosticism were equated also by the Church Fathers). Akiva’s “mystical” admonition (Ḥag. 14b) could easily have been a parody on the “apocalyptic”-enthusiastic style of the Epicureans (parallel parody H. Usener, Epicurea, fragm. 364; Gen. R. 1:5, Theodor-Albeck, p. 2 mentions “nothing from nothing”; Mid. Ps. to 1:22 the “automatic” universe; cf. Jos., Ant., 10:280).

Even more interesting is a section of Epicurus.net on Epicureanism’s relations with Judaism which explains the relationship as follows:

In the Talmudic Mishnah, one of the authoritative documents of Rabbinical Judaism, there is a remarkable statement in the tractate Sanhedrin that defines the Jewish religion in relation to Epicureanism:

“All Israel has a share in the world to come, as Isaiah said: And all of your people who are righteous will merit eternity and inherit the land. And these are the people who do not merit the world to come: The ones who say that there is no resurrection of the dead, and those who deny the Torah is from the heavens, and Epicureans (‘Apikorsim’).”

Modern Jews use “apikoros” as a generic term for an unbeliever, but the authors of the Talmud were clearly singling out followers of Epicurus. In effect, this statement is saying that all of Israel will enjoy eternal life except those who get corrupted by Epicurus or certain characteristic Epicurean beliefs (namely, Epicurean denials of an after-life and of divine providence). This peculiar hostility towards Epicureanism is all the more remarkable for the fact that this particular statement was later taken to be the basis for speculation about the meaning of Jewishness among Rabbis of the Middle Ages, the most famous of whom, Moses Maimonides, explicitly continued the Jewish tradition of denouncing Epicureanism late in the 12th century A.D.

The origins of this anti-Epicurean element of Jewish thought can be traced to the 2nd century B.C., when the Seleucid monarch Antiochus IV Epiphanes embarked on a military campaign against Egypt in an attempt to conquer his Ptolemaic rival. Judea had the misfortune to be located between the Seleucid heartland of Syria and Ptolemaic Egypt, and the Judeans were divided into pro-Seleucid and pro-Ptolemaic factions. At this time, the hereditary Zadokite priesthood had been deeply influenced by Greek culture, adopting doctrines that tended to discount the conservative oral tradition and deny some of the more superstitious beliefs then current, notably the belief in bodily resurrection. At the time of Antiochus’s campaign, the Zadokite high priest was a pro-Ptolemaic partisan.

Antiochus, anxious to secure Judea in connection with his Egyptian expedition and to create a more culturally-unified empire, had the Zadokite high priest removed and founded a Greek-style Gymnasium in Jerusalem. Antiochus was sympathetic to Epicureanism (albeit not acting in accord with Epicurus’s injunctions to avoid politics), so his attempt at a forced hellenization of Judea was closely linked to Epicureanism in the minds of the Judean patriots. Another factor was that Epicureans were prominent in the hellenized cities of Galilee, creating a rivalry between Epicureanism and the traditional religion among the northern Judeans. Antiochus’s provocations brought about a strong nationalistic reaction, which exploded into violence when a rumor of Antiochus’s death reached Judea. While the rumor was false, nonetheless the Hasmonean leader Judas Maccabeus was ultimately successful in his revolt against the Seleucids.

After the Hasmoneans consolidated their power, a rather delicate situation developed with respect to the priesthood. The hereditary successors to the priesthood had had their legitimacy fatally undermined by their hellenizing tendencies and their close association with the foreign Ptolemaic monarchy. The party of the “separatists” (the Pharisees), prevented the Zadokite legitimists (the Sadducees) from reassuming control of the temple in Jerusalem, while some of the Sadducees set up a rival temple in the Egyptian city of Leontopolis.

To further complicate matters, Judea later became a client state of Rome, and the Romans installed their own Jewish rulers and Sadducee priests. Not only were they opposed by the Pharisees, other anti-foreign religious factions arose during the late Hasmonean period (early 1rst century B.C.) to challenge the Pharisees and the Sadducees and the Samaritans (a regional offshoot of Judaism whose followers had established their own center of worship on Mount Gezzerim), their adherents questioning the necessity for temple ritual and priestly authority altogether. One of these dissident groups called themselves the “keepers” (Nazarim) of divine wisdom. These Nazarim, or Nazarenes, taught that righteousness towards others along with frequent rituals of baptism and anointment and a ritual eucharist for the dead was sufficient to place oneself in accord with God without the traditional temple ceremonies. After the Roman conquest of Judea, the Nazarene cults became one of the focal points of resistance to Roman and Herodian rule, as both the Pharisees and Sadducees were co-opted by the Herodian monarchy that had been installed by the Romans.

The historical significance of these intricacies of ancient Judean politics is that the Pharisees are the direct ancestors of modern Rabbinical Judaism, while the Nazarene movement spawned two religions that have survived to modern times, the Mandaean and the Christian. The founding of these two Nazarene religions was attributed to John the Baptist and Jesus, respectively.

The Talmud is derived from the Pharisaic oral tradition, so the Talmud passage quoted above can be explained as a Pharisaic attack on the Sadducees by comparing some of the distinctive Sadducee beliefs to those of the hated Seleucid defiler of the Temple. It seems that the Sadducees could never quite live down the charge of having sold out to the Seleucids and the Romans, as they disappeared shortly after the Romans destroyed the Jerusalem Temple in 70 A.D. and the genealogical records for proving their Zadokite ancestry (the last remaining basis for Sadducee legitimacy) along with it. Today, the memory of the Maccabean revolt against Antiochus survives in the Jewish celebration of Hanukkah, and the legacy of the factional conflicts of the Hasmonean period lives on in the separate religions of the Jews, Mandaeans, and Christians and in the Talmudic denunciation of Epicureanism.

It is also worthy to note how strikingly close several critical beliefs of the ancient Sadduccees mirrored those of Epicurus. Also from Wikipedia:

According to Josephus, the Sadducees believed that:

The Sadducees rejected the belief in the Resurrection of the Dead, which was a central tenet believe by Pharisees and by Early Christians.

And so in light of this history, the best I can think to say from an Epicurean perspective is “Happy Hannukah to the Sadducees!”

[colored_box variation=”red”]UPDATE: Be sure to read this excellent article by Christopher Hitchens: “Hanukkah Celebrates the Triumph of Tribal Jewish Backwardness“[/colored_box]