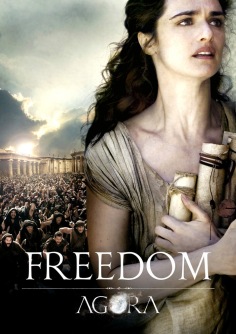 This weekend I had the opportunity to see Agora, the recent movie starring Rachel Weisz.  Agora is now showing only in the U.S., in very limited distribution prior to the release of the DVD in October. I will try to develop this post with greater detail later, but the movie is well worth some preliminary comments:

Everyone who comes across this blog and has the slightest interest in philosophy and the ancient world should see this movie. It is very well done, the sets and acting are generally first rate, and the movie does set up many crucial philosophical issues that are rarely discussed in movies intended for the general public.

It is in the script and the development of these issues, however, that the disappointment comes. If you go into this movie expecting to see Hypatia deliver a rousing defense of individual freedom, natural law, or even reason itself — don’t hold your breath.  Likewise, there is little attempt to deliver a cogent argument against religion.  Through this silence the movie illustrates another profound Epicurean insight:  the impotence of ivory-tower Platonism in the face of religious fanaticism.  As Thomas Jefferson observed in his letter to William Short, Platonism and Stoicism were not at root incompatible with the new Christian faith, but rather proved to be a fertile field which Christianity co-opted for its own.

Fair or not, the producers of this movie portray Hypatia as so consumed by astronomy that she seems to see no way to resist or even recognize her impending doom.  She is portrayed as doing almost nothing to protect herself against the Christian mob other than seeking the protection of her former student, the Roman governor.  And rather than provide him sound philosophical advice on how to combat the rising tide of fanaticism, her only advice for dealing with the Christians is to “arrest” them.  When her Roman protector makes clear that he will no longer be able to protect her against the mobs, Hypatia is portrayed as meekly accepting what she appears to regard as inevitable.  From start to finish her Platonic roots allow her to summon no more inspirational a defense for herself than the line from the trailer:  “You don’t question what you believe…. I must.”  True to the Platonic ideal, perhaps, but woefully inadequate.

The historical record on Hypatia is meager, so one can hope that the real Hypatia took stronger action in her own defense. But this movie seeks nothing more than to portray the evil of religious fanaticism, and for that it is sufficient to show Hypatia only as the helpless victim.  The final effect at least has the merit of illustrating one of the most famous lines from De Rerum Natura:  Tantum religio potuit suadere malorum! So much does religion have the power to persuade to evil!

Those who leave this movie depressed, however, need to be told that they are not helpless against the evils of religion, and that already in the ancient world Epicurus had articulated a valid alternative to the twin errors of religion and academic skepticism.

Over time I will attempt to revise this post to highlight what Lucretius or Epicurus might have advised Hypatia at the various stages of her crisis, but as I work toward that goal, what follows are several passages of which Hypatia must have been aware:

Cicero De Finibus: Was Epicurus to occupy himself like Plato, with music and geometry, arithmetic and astronomy, which are at best mere tools, and which, if they start from false premises, can never reveal truth or contribute anything to make our lives happier and therefore better? Was Epicurus to study the limited arts such as these, and neglect the master art, so difficult but correspondingly so fruitful, the art of living? No! It was not Epicurus who was uninformed. The truly uneducated are those who ask us to go on studying until old age the subjects that we ought to be ashamed not to have learned when we were children!

Lucretius, Book VI: He therefore cleansed men’s breasts with truth-telling precepts, and fixed a limit to lust and fear, and explained what was the chief good which we all strive to reach. He pointed out the road along which by a narrow track we may strain on toward the highest good in a straight course. He showed too what evils exist in mortal affairs, rising up and manifoldly flying about by a natural — call it chance or force, because nature had so brought it about. He showed also from what gates you must sally out duly to encounter each, and he proved that men mostly without cause arouse in their breasts the melancholy tumbling billows of cares. For even as children are flurried and dread all things in the thick darkness, thus we in the daylight fear at times things not a whit more to be dreaded than what children shudder at in the dark and fancy will come to pass. This terror therefore and darkness of mind must be dispelled not by the rays of the sun and glittering shafts of day, but by the aspect and law of nature. (paraphrase of Munro and Bailey)

To close this post on the point made in the heading: Freedom isn’t free. We must always observe and study what is going on around us — before our eyes — and then draw conclusions and act accordingly. We must deal not only with the false threats and fears generated by religion, but we must also with the actual threats which they at times may pose.  A large part of dealing with those threats is recognizing them, and we must not be like the supporter of Hypatia who exclaimed, when when his stronghold was already under attack, how surprised  he was that the Christians had become so numerous.

When threats are building against not just our freedom but against our very lives, we cannot become overly concerned with idle speculations — the diversionary specialty of all variants of Platonism.  When the storm is gathering it is particularly crucial to follow Epicurus’ call to study the nature of things.  Only if we identify the reality of those things that threaten us can we then through reason and wisdom devise the proper response.  And only then can we hope to summon the courage to “sally out” from the gates of our forts and combat those threats before it is too late.

Private comments are welcome on the comments page.