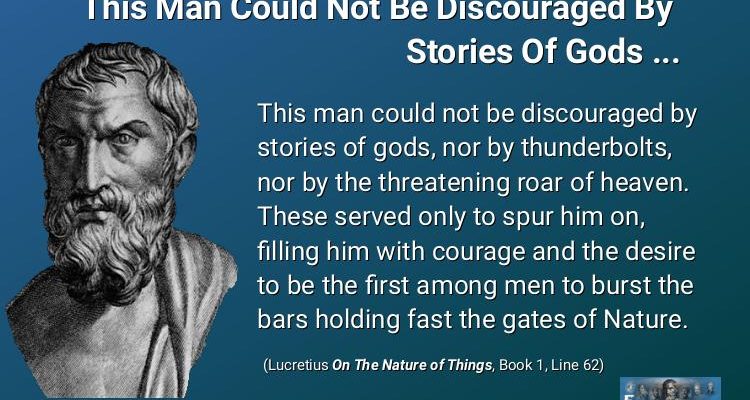 This man could not be discouraged by stories of gods, nor by thunderbolts, nor by the threatening roar of heaven. These served only to spur him on, filling him with courage and the desire to be the first among men to burst the bars holding fast the gates of Nature. (Lucretius Book 1, Line 62)

It appears to me that this passage in Lucretius is emphasizing that Epicurus wasn’t discouraged either by the stories of the gods that he heard from other men, or by the phenomena of the sky that he could not explain. To the contrary, he used those to build his own enthusiasm for finding out the truth and responding to them, rather than allowing them to wear him out and get discouraged.

I’d also say that he probably wasn’t primarily motivated to “be the first among men” to do this, but at the same time we can also be sure that he wasn’t seeking knowledge for the sake of knowledge, but knowledge for the pleasures that knowledge brings, and Epicurus would not have been oblivious to, and indeed would have welcomed the reward, of the joy and delight and peace of mind that he would gain for himself and his friends by doing so.