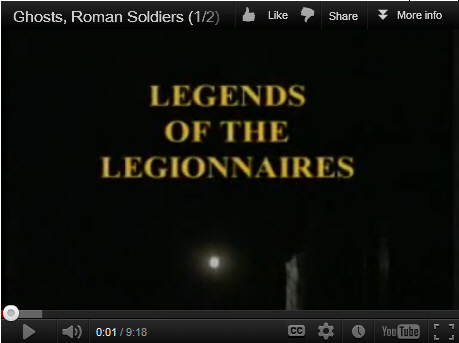 We don’t often discuss the Epicurean view of “images” anymore, but certainly Epicurus considered them significant, and discussion of them occupies a good deal of space in Lucretius’  De Rerum Natura.  The man in this English video seems credible and convinced he saw images of quite an unusual kind, and since his images remind us of the great age of Epicureanism, this is both interesting an entertaining.  As Lucretius explained, we ought to be mindful of at least a tentative explanation for such phenomena:

Wherefore we must well grasp the principle of things above, the principle by which the courses of the sun and moon go on, the force by which every thing on earth proceeds, but above all we must find out by keen reason what the soul and the nature of the mind consist of, and what thing it is which meets us when awake and frightens our minds, if we are under the influence of disease; meets and frightens us too when we are buried in sleep; so that we seem to ‘see and hear speaking to us face to face them who are dead, whose bones earth holds in its embrace.

And from Book IV, a possible explanation:

And now that I have taught what the nature of the mind is and out of what things it is formed into one quickened being with the body, and how it is dissevered and returns into its first-beginnings, I will attempt to lay before you a truth which most nearly concerns these questions, the existence of things which we call idols of things: these, like films peeled from the surface of things, fly to and fro through the air, and do likewise frighten our minds when they present themselves to us awake as well as in sleep, what time we behold strange shapes and idols of the light-bereaved, which have often startled us in appalling wise as we lay relaxed in sleep: this I will essay, that we may not haply believe that souls break loose from Acheron or that shades fly about among the living or that something of us is left behind after death, when the body and the nature of the mind destroyed together have taken their departure into their several first-beginnings.

I say then that pictures of things and thin shapes are emitted from things off their surface, to which an image serves as a kind of film, or name it if you like a rind, because such image bears an appearance and form like to the thing whatever it is from whose body it is shed and wanders forth.

This you may learn, however dull of apprehension, from what follows.

First of all, since among things open to sight many emit bodies, some in a state of loose diffusion, like smoke which logs of oak, heat which fires emit; some of a closer and denser texture, like the gossamer coats which at times cicades doff in summer, and the films which calves at their birth cast from the surface of their body, as well as the vesture which the slippery serpent puts off among the thorns; for often we see the brambles enriched with their flying spoils: since these cases occur, a thin image likewise must be emitted from things off their surface.

For why those films should drop off and withdraw from things rather than films which are really thin, not one tittle of proof can be given; especially since there are on the surface of things many minute bodies which maybe discharged in the same order they had before and preserve the outline of the shape, and be discharged with far more velocity, inasmuch as they are less liable to get hampered being few in number and stationed in the front rank.

For without doubt we see many things discharge and freely give not only from the core and center, as we said before, but from their surfaces, besides other things, color itself.

And this is commonly done by yellow and red and dark blue awnings, when they are spread over large theaters and flutter and wave as they stretch across their poles and crossbeams; for then they dye the seated assemblage below and all the show of the stage and the richly attired company of the fathers, and compel them to dance about in their color.

Previous ArticleIt All Comes Down To This. Take Your Stand, And Know Why You Take It.
Next Article“Will We Be The First Martians?”