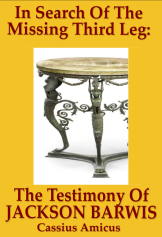 The following is the introduction to a new epub I am preparing on Anticipations.  Although I do not contend that he was an avowed Epicurean, I have been reading the works of Jackson Barwis, and I believe his views are likely consistent with or at least analogous to the arguments that Epicurus used in explaining the nature of Anticipations.  The full epub may be downloaded free here.

As usual, I apologize for typos and editing errors!

One of the most difficult issues that arises from the fragmentary nature of our remaining Epicurean texts is the question of what Epicurus meant by the term that is usually translated as “Preconceptions” or “Anticipations.”

It is clear that Epicurus considered men to possess three criteria by which to separate the true from the false. Diogenes Laertius states “Now in the Canon, Epicurus says that the criteria of truth are the senses, the preconceptions, and the passions.” He continues, “By preconception, the Epicureans mean a sort of comprehension as it were, or right opinion, or notion, or general idea which exists in us; or, in other words, the recollection of an external object often perceived anteriorly.”

This definition is hardly satisfying. How can a “recollection” of an external object be perceived “anteriorly?” Laertius’ examples are of little help:

“Such, for instance, is the idea ‘Man is a being of such and such a nature.’ At the same moment that we utter the word man, we conceive the figure of a man, in virtue of a preconception which we owe to the preceding operations of the senses. Therefore the first notion which each word awakens in us is a correct one; in fact we could not seek for anything if we had not previously some notion of it. To enable us to affirm that what we see at a distance is a horse or an ox, we must have some preconception in our minds which makes us acquainted with the form of a horse or an ox. We could not give names to things if we had not a preliminary notion of what the things were. These preconceptions then furnish us with certainty. And with respect to judgments, their certainty depends on our referring them to some previous notion, of itself certain, in virtue of which we affirm such and such a judgment; for instance, ‘How do we know whether this thing is a man?’”

In these passages, Laertius seems to be focusing on the process of determining truth, which Epicurus himself highlighted in Principle Doctrine 25 (Yonge translation):

“If you simply discard one sense, and do not distinguish between the different elements of the judgment, so as to know on the one hand, the induction which goes beyond the actual sensation, or, on the other, the actual and immediate notion; the affections, and all the conceptions of the mind which lean directly on the sensible representation, you will be imputing trouble into the other sense, and destroying in that quarter every species of criterion.”

As Laertius observed, Epicurus taught that the proper method for determining truth in any particular case is to use our intelligence to evaluate the impressions we receive from the data provided by our five senses, our Preconceptions, and our pain/pleasure mechanism.  This evaluation process is essentially one of comparison, in that new data which has not yet been evaluated is compared against conclusions previously drawn from data which has been evaluated to be accurate to a reliable degree.

But these observations leave us largely in the dark as to the nature of the Preconceptions themselves, and why Epicurus elevated Preconceptions to a co-equal third of the triad among the Canon of Truth. If a Preconception is nothing more than a conclusion of prior reasoning that has been determined to be true, then Preconceptions are purely derivative of the information received from the Five Senses and from the Pain/Pleasure Mechanism. If they are indeed derivative, they would not seem to deserve an equal ranking among the primary criteria in the Canon.

If they indeed deserved an equal ranking, then the alternate hypothesis is that Epicurus held Preconceptions to be a third faculty men possess in addition to the Five Senses and the Pain/Pleasure Mechanism, and it is critical to our success in living happy lives that we search for, identify, and employ this third leg of the triad.

Lucretius does not address this issue explicitly in De Rerum Natura, so our second most reliable text of Epicurean doctrine sheds little light on this question. Cicero, however, has preserved for us an illuminating – though brief — discussion of this matter in On The Nature of The Gods. In the course of recounting the various opinions held by poets and philosophers about the nature of the gods, Cicero records the following:

“Now whoever reflects on the rashness and absurdity of these tenets [held by other religions and philosophies], must inevitably entertain the highest respect and veneration for Epicurus, and perhaps even rank him in the number of those beings who are the subject of this dispute, for he alone first founded the idea of the existence of the gods on the impression which nature herself hath made on the minds of all men. For what nation, what people are there, who have not, without any learning, a natural idea, or prenotion of a Deity? Epicurus calls this preconception; that is, an antecedent conception of the fact in the mind, without which nothing can be understood, inquired after, or discoursed on; the force and advantage of which reasoning we receive from that celestial volume of Epicurus, concerning the Rule and Judgment of things.

Here, then, you see the foundation of this question clearly laid; for since it is the constant and universal opinion of mankind, independent of education, custom, or law, that there are Gods; it must necessarily follow that this knowledge is implanted in our minds, or rather innate in us. That opinion respecting which there is a general agreement in universal nature must infallibly be true; therefore it must be allowed that there are Gods; for in this we have the concurrence, not only of almost all philosophers, but likewise of the ignorant and illiterate. It must be confessed that the point is established, that we have naturally this idea, as I said before, or pre-notion of the existence of the Gods…. On the same principle of reasoning we think that the Gods are happy and immortal; for that nature, which hath assured us that there are Gods, has likewise imprinted in our minds the knowledge of their immortality and felicity; and if so, what Epicurus hath declared in these words, is true: “That which is eternally happy cannot be burdened with any labour itself, nor can it impose any labour on another; nor can it be influenced by resentment or favour; because things which are liable to such feelings must be weak and frail.”

These words appear to validate the rank of the Preconceptions as a third coequal leg. Under this view, Preconceptions are an independent source of information provided by Nature which is integrated, but co-equal, with the Five Senses and of the Pain/Pleasure Mechanism.

If this was indeed Epicurus’ view, his teachings were squarely at odds with the standard notions of the “blank slate” – the “unscribed tablet” – which date at least as far back as Aristotle, but which became enshrined in modern Western thought through the work of John Locke. As commented in Wikipedia:

[Our] modern idea of the [tabula rasa] theory is mostly attributed to John Locke’s expression of the idea in An Essay Concerning Human Understanding in the 17th century. In Locke’s philosophy, tabula rasa was the theory that the (human) mind is at birth a “blank slate” without rules for processing data, and that data is added and rules for processing are formed solely by one’s sensory experiences. The notion is central to Lockean empiricism.

An exhaustive discussion of the nature of Anticipations is unfortunately beyond the scope of this work. Interested readers should refer to Chapter VIII of Norman DeWitt’s Epicurus and His Philosophy, where these issues are pursued in detail.

The remainder of this volume is devoted to a writer who came some one hundred years after Locke, and who seems to have left posterity only two significant works, of which one concerns us here. In 1779, Jackson Barwis published “Dialogues Concerning Innate Principles, Containing An Examination of Mr. Locke’s Doctrine On That Subject.”

Barwis is little noted today, but according to an 1810 obituary, Barwis died –

…at his seat, Marshall’s, near Romford, Essex, aged 71, … esq. of Walbrook-house; well known in the mercantile world for his honor and integrity, and not unknown in the literary world, having written some Dialogues on Liberty, and other publications, which shewed great vigor of intellect and acuteness of reasoning.”

The Dialogues Concerning Innate Principles is devoted in its entirety to refuting the blank slate theory advanced by Locke. The original work (along with its companion dialogues on liberty) is available via Google books, but the version found there is a very poor scan, and the text is plagued with obsolete spellings and punctuation, and in the form found there is difficult to use for the reader who wishes to study Barwis’ work.

Where DeWitt provides the historical background and the evidence in the Epicurean texts that support the vital role of Preconceptions, Barwis never makes reference to Epicurus in this volume, but tackles head-on the standard Lockean arguments that men possess no innate moral guidance implanted in them by Nature.

I do not mean to suggest that Barwis is an Epicurean, but merely that many of the arguments Barwis advances seem to me to be consistent with those which Epicuruse would likely have employed in his Canon of Truth. Unless new texts are discovered in the future, Epicurus’ own arguments will never be known with certainty, but I commend the following work to the consideration of those who wish to conduct for themselves a search for the Lost Third Leg.