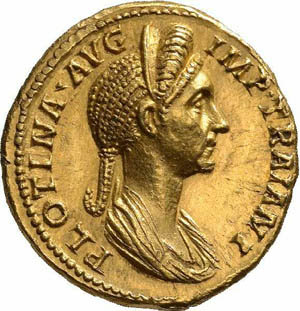 Thanks to a recent post in the “Garden of Epicurus” Facebook page, I have now taken the time to read Nietzsche’s “The AntiChrist.”  I have read nothing else by Nietzsche and by quoting him here I neither endorse nor disparage either these excerpts nor anything else he wrote.  I am well aware that the implications of Nietzsche’s views are highly controversial, but these passages are significant and students of Epicurus ought to be aware of them.    [My use of the Plotina coin to illustrate this post is simply a reference to the “every respectable intellect was Epicurean” phrase.]

These are the two physiological realities upon and out of which the doctrine of salvation has sprung. I call them a sublime super-development of hedonism upon a thoroughly unsalubrious soil. What stands most closely related to them, though with a large admixture of Greek vitality and nerve-force, is Epicureanism, the theory of salvation of paganism. Epicurus was a typical décadent: I was the first to recognize him.—The fear of pain, even of infinitely slight pain—the end of this can be nothing save a religion of love….

But then, as part of his devastating attack on Christianity, he cites Epicurus approvingly:

Christianity was the vampire of the imperium Romanum,—overnight it destroyed the vast achievement of the Romans: the conquest of the soil for a great culture that could await its time. Can it be that this fact is not yet understood? The imperium Romanum that we know, and that the history of the Roman provinces teaches us to know better and better,—this most admirable of all works of art in the grand manner was merely the beginning, and the structure to follow was not to prove its worth for thousands of years. To this day, nothing on a like scale sub specie aeterni has been brought into being, or even dreamed of!—This organization was strong enough to withstand bad emperors: the accident of personality has nothing to do with such things—the first principle of all genuinely great architecture. But it was not strong enough to stand up against the corruptest of all forms of corruption—against Christians…. These stealthy worms, which under the cover of night, mist and duplicity, crept upon every individual, sucking him dry of all earnest interest in real things, of all instinct for reality—this cowardly, effeminate and sugar-coated gang gradually alienated all “souls,” step by step, from that colossal edifice, turning against it all the meritorious, manly and noble natures that had found in the cause of Rome their own cause, their own serious purpose, their own pride.  The sneakishness of hypocrisy, the secrecy of the conventicle, concepts as black as hell, such as the sacrifice of the innocent, the unio mystica in the drinking of blood, above all, the slowly rekindled fire of revenge, of Chandala revenge—all that sort of thing became master of Rome: the same kind of religion which, in a pre-existent form, Epicurus had combatted.  One has but to read Lucretius to know what Epicurus made war upon—not paganism, but “Christianity,” which is to say, the corruption of souls by means of the concepts of guilt, punishment and immortality.—He combatted the subterranean cults, the whole of latent Christianity—to deny immortality was already a form of genuine salvation.—Epicurus had triumphed, and every respectable intellect in Rome was Epicurean—when Paul appeared … Paul, the Chandala hatred of Rome, of “the world,” in the flesh and inspired by genius—the Jew, the eternal Jew par excellence…. What he saw was how, with the aid of the small sectarian Christian movement that stood apart from Judaism, a “world conflagration” might be kindled; how, with the symbol of “God on the cross,” all secret seditions, all the fruits of anarchistic intrigues in the empire, might be amalgamated into one immense power. “Salvation is of the Jews.”—Christianity is the formula for exceeding and summing up the subterranean cults of all varieties, that of Osiris, that of the Great Mother, that of Mithras, for instance: in his discernment of this fact the genius of Paul showed itself. His instinct was here so sure that, with reckless violence to the truth, he put the ideas which lent fascination to every sort of Chandala religion into the mouth of the “Saviour” as his own inventions, and not only into the mouth—he made out of him something that even a priest of Mithras could understand…. This was his revelation at Damascus: he grasped the fact that he needed the belief in immortality in order to rob “the world” of its value, that the concept of “hell” would master Rome—that the notion of a “beyond” is the death of life…. Nihilist and Christian: they rhyme in German, and they do more than rhyme…

Over time I hope to comment further on Nietzsche, but I need to study this much further.  Certainly comments like the following begin with a thought that is parallel to Epicureanism,  but then this denunciation of “equal rights for all” and the discussion of “the right of dominion” seem fraught with peril.  I suppose here it is critical to define the terms before beginning to evaluate:

When the centre of gravity of life is placed, not in life itself, but in “the beyond”—in nothingness—then one has taken away its centre of gravity altogether. The vast lie of personal immortality destroys all reason, all natural instinct—henceforth, everything in the instincts that is beneficial, that fosters life and that safeguards the future is a cause of suspicion. So to live that life no longer has any meaning: this is now the “meaning” of life…. Why be public-spirited? Why take any pride in descent and forefathers? Why labour together, trust one another, or concern one’s self about the common welfare, and try to serve it?… Merely so many “temptations,” so many strayings from the “straight path.”—“One thing only is necessary”…. That every man, because he has an “immortal soul,” is as good as every other man; that in an infinite universe of things the “salvation” of every individual may lay claim to eternal importance; that insignificant bigots and the three-fourths insane may assume that the laws of nature are constantly suspended in their behalf—it is impossible to lavish too much contempt upon such a magnification of every sort of selfishness to infinity, to insolence. And yet Christianity has to thank precisely this miserable flattery of personal vanity for its triumph—it was thus that it lured all the botched, the dissatisfied, the fallen upon evil days, the whole refuse and off-scouring of humanity to its side. The “salvation of the soul”—in plain English: “the world revolves around me.”… The poisonous doctrine, “equal rights for all,” has been propagated as a Christian principle: out of the secret nooks and crannies of bad instinct Christianity has waged a deadly war upon all feelings of reverence and distance between man and man, which is to say, upon the first prerequisite to every step upward, to every development of civilization—out of the resentment of the masses it has forged its chief weapons against us, against everything noble, joyous and high-spirited on earth, against our happiness on earth…. To allow “immortality” to every Peter and Paul was the greatest, the most vicious outrage upon noble humanity ever perpetrated.—And let us not underestimate the fatal influence that Christianity has had, even upon politics! Nowadays no one has courage any more for special rights, for the right of dominion, for feelings of honourable pride in himself and his equals—for the pathos of distance…. Our politics is sick with this lack of courage!—The aristocratic attitude of mind has been undermined by the lie of the equality of souls; and if belief in the “privileges of the majority” makes and will continue to make revolutions—it is Christianity, let us not doubt, and Christian valuations, which convert every revolution into a carnival of blood and crime! Christianity is a revolt of all creatures that creep on the ground against everything that is lofty.

Previous ArticleSt. Paul vs. Epicurus
Next Article“If You Reject Absolutely Any Single Sensation … You Will Reject Every Standard of Truth.”