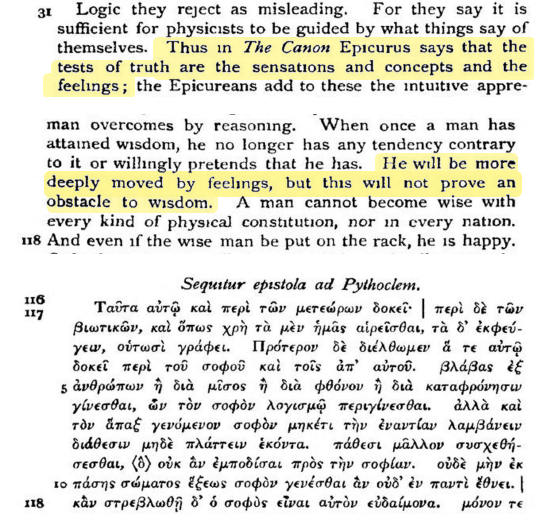 We frequently get into discussions in which some people contend that the goal of life is to achieve implacable emotionlessness. The Epicurean view of “tranquility” does not require this, because the meaning of tranquility consistent with the rest of Epicurean philosophy is better understood as “unbroken” and “smooth.” In support of this we know that Epicurus called his students to “continuous pleasure.” Under the influence of Stoic hostility to emotion, however, many people exalt emotionlessness as the goal. They argue that avoidance of pain is the true goal, and that therefore emotionlessness is superior to the joys and ordinary pleasures of life.
In response to those contentions, I frequently cite the following passage on “feelings” from Diogenes Laertius, and it is important to point out how this passage links to even more fundamental Epicurean doctrine. The graphic below shows the Bailey version of two passages, with the Greek original of the payoff passage. Think carefully about the implications of this linkage: Not only should we never forget that emotion (emotions / feelings / passions / pleasure / pain) are not a **hindrance** to wisdom — more importantly, the wise man will experience these passions more deeply than other men! That is because emotions/passions/pleasure/pain are the **guides of life**, so OF COURSE Epicureans will take the OPPOSITE view of the Stoics and will never embrace “emotionlessness.”
Epicureans will experience passions MORE DEEPLY than other men, because emotions / feelings / passions / pleasure / pain are a central part of the Canonical foundation of all that we decide to choose and to avoid!  They are not an *obstacle* to his wisdom, but in fact a *source* of his wisdom.

Following along on the text I posted this morning, here is Bailey’s translation of the fragment where Epicurus spoke about “continuous pleasures.” If we have any experts on the Greek who care to comment, I would be interested in their opinion of Bailey’s translation, especially as to “disturbing results.” Dewitt’s view, if I recall correctly, is that Epicurus wanted to make the point that pleasure could be experienced continuously (uninterruptedly) as a means of disputing Plato and others, who argued that uninterrrupted pleasure was impossible.

If that was Epicurus’ intent, then it might be logical that when Epicurus refers to empty virtue producing only “disturbing hopes,” his emphasis was on how the results of such hopes are not continuous, and are often interrupted. So, for example, it might be helpful to think of this as saying “I summon you to uninterrupted pleasure, and not to vain and empty virtues, which have nothing but interrupted (occasional? speculative?) hope of results.

If so, that would call to mind the final words attributed to Brutus by Plutarch: “O wretched Virtue, thou wert but a name, and yet I worshipped thee as real indeed; but now, it seems, thou were but fortune’s slave.”

In sum, I think the emphasis of the thought is that the highest experience of pleasures is when we experience them smoothly and without interruption (meaning, without any mixture of pain), rather than focusing on the “smoothness” itself as sufficient description of the particular pleasures being experienced.

Previous ArticleThe Wider Implications Of The Epicurean Warnings About Passionate Love
Next ArticlePeace and Safety for Your Twentieth of March: If [happiness] be absent, ALL our actions are directed towards attaining it.