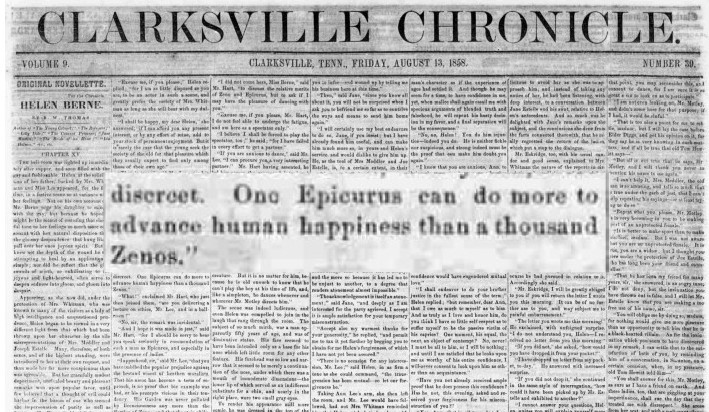 “HELEN BERNE”
An Original Novellette for the Chronicle
By R. W. Thomas

If all persons of your age, aunt, possessed your unbounded charity and goodness of heart, the unnatural barricrs between the two periods of life would be broken down, and old age would be rendered more cheerful, and youth, more discreet. One Epicurus can do more to advance human happiness than a thousand Zenos.”

‘What!” exclaimed Mr. Hart, who just then joined them, “are you delivering a lecture on ethics, Mr. Lee, and in a ballroom!”

“No, sir, the remark was incidental.”

“And I hope it was made in jest,” said Mr. Hart, “for I should be sorry to hear you speak seriously in commendation of such a man as Epicurus, and especially in the presence of ladies.”

“I apprehend, sir,” said Mr. Lee, “that you have imbibed the popular prejudice against the best and wisest of heathen moralists. That his name has become a term of reproach, is no proof that his example was bad, or his precepts vicious in their tendency. His Garden was never polluted by licentiousness any more than the Portico of Zeno; and that the Stoic philosophy, of the latter, obtained to a greater degree than the benign and humanizing tenets of the former, is no argument in favor of the superiority of either; and then, as now, want of success [was not] prima facie evidence of want of merit. In the rivalry between the schools of Philosophy, the ascendancy of the one was the ruin of the other, and was so understood by the populace, without one sensible reflection upon the merits of either.”

“I am not conversant enough with the subject to argue it with you, Mr. Lee; but even granting that Epicurus was the great and good man you esteem him to have been, his opinions have been condemned by the world, and his practice made a synonym with licentiousness. Is it right, then, that we should commend doctrines that are considered subversive of good morals, by the great mass of mankind, even if they are as pure as truth itself?”

“It is my turn, now, Mr. Hart, to hope that you have spoken in jest, for, surely, sir, you can not seriously ask if it be right to advance truth. But if you intend, as I suspect, to ask whether it be politic to do so, a good deal may be said on both sides; though I incline to a strict construction of the old adage that honesty is the best policy. Error is never beneficial, and truth, never hurtful, and it is the want of the latter, and the abundance of the former that create the ills which curse society.  And pardon me, sir, if I add that I can never be politician enough to contract or expand my honest opinions to fill the measure of popular belief.”

“But you cannot hope, Mr. Lee, to remove this curse from society by reviving the doctrines of Epicurus? Do you not agree with me, Miss Berne, that the remedy would be worse than the evil itself?”

“I am no metaphysician;” she replied, “but with my limited information on the subject I would say that the philosophy which makes happiness tho primary object of life, and which teaches us to obtain it through the proper direction of our faculties — an enlargement of our perceptions and a refinement of our tastes, is preferable to that which assumes that perfect happiness consists in perfect indifference.”

“You are the first lady,” said Mr. Hart, “that I ever heard speak in commendation of Epicurus.”

“He is a favorite character of my father,” she replied, “and perhaps I am too much prejudiced in his favor, you, too much against him. At all events, the subject is too deep for me, and I must leave it in more competent hands.”

NOTE:  It appears to me that the editor of the Clarksville Chronicle mistyped this following passage to omit a negative about the meaning of want of success.  I have edited the text above and inserted the original below.  If I am misreading this sentence please let me know! 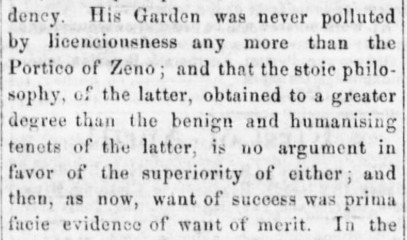 Previous ArticleToward A Better Understanding Of Epicurus: Eight Areas Of Focus For 2015
Next ArticleThe Reason For The Philosophic Fighting, In The Words of Cicero’s Epicurean Speaker