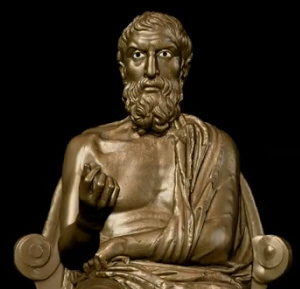 Prior to beginning my study Epicurus I had picked up the impression that Plato was somehow “anti-reason,” and that Aristotle was the great defender of “reason” against the Platonic viewpoint.  I now see that was a great error, and that — at least from his own point of view — Plato was profoundly “pro-reason.”  Rather than denigrating reason, Plato elevated reason, and held that the senses cannot be trusted to provide accurate, or adequate, inputs in order to reach certainty in many important issues of life.  In place of reliance on the senses, Plato held there was higher dimension of forms existing in a god-created universe that could be understood only through reason.  This other dimension of ultimate realities could not be “sensed,” but could be reasoned about.

Epicurus departed from and attacked the Platonist model both on the role of reason and the view that the universe had been created by gods.  Epicurus argued that the senses are competent to allow men to live in the real world, that there is no other dimension of forms as Plato argued, and that Aristotle and Plato were wrong to assert that gods created or directed the universe.  Instead, Epicurus held that universe is composed entirely and only of material things that exist (atoms) and empty space between those material things (the void).

By observing that our senses indicate to us that matter is never created from nothing or destroyed to nothing, Epicurus deduced that the atoms are eternal, and the universe was not created at any single point in time by a god or by any other means.  This observation disposed of Plato’s and Aristotle’s god-directed universe.

By observing that men and other animals possess free will (because we see that they choose their actions), Epicurus deduced that this free will must have some basis in the elements.  He deduced that as the atoms move through space, some or all of those atoms must have the capacity to swerve at no fixed time and no fixed place.  From this Epicurus developed one of the doctrines for which he is most famous – that of the atomic swerve.

Because only atoms and void exist, Epicurus rejected the Platonic view that reason could act on its own in an other-dimensional world of forms without regard to input or restraint from the senses.   Epicurus embraced “reason” — defined as the proper analysis of established facts through the faculties of Nature, but he disparaged Platonic “logic” — defined as a method of “reasoning” operating only in its own world of unrealities.  Cicero records that Epicurus endorsed reason in his saying, “The Wise Man is but little interfered with by fortune: the great concerns of life, the things that matter, are controlled by his own wisdom and reason.”  But in the very same sequence of text, Cicero records that Epicurus also held that “Logic, on which your [Platonic] school lays such stress, he held to be of no effect either as a guide to conduct or as an aid to thought.”

In this way Epicurus was fighting the Platonic view that reason itself can serve as a direct contact with reality.  To Epicurus, reason is important, but it is ultimately only a tool which we use in our minds as an aid to thinking.  Standing alone, reason is useless — and often harmful — if it is not performing its operations on direct and reliable observations of reality.  In turn, Epicurus held that direct and reliable observations of reality come only through one of three natural faculties (1) the five senses, (2) the pain / pleasure mechanism, and (3) the “Anticipations.”  (1) and (2) are self-explanatory and very familiar to us.  The third, the “Anticipations,” is somewhat controversial.

There is conflicting evidence on what Epicurus considered to be the nature of “Anticipations.”  One camp (based primarily on selections from the biography by Diogenes Laertius) contends that Anticipations are a description of what we might today call the process of “concept formation.”  This camp contends that Anticipations are concepts which the mind has developed by reasoning over time about the matters observed through the senses.  These concepts, once verified and stored in the mind, then serve as points of reference against which we can compare and understand new things.

The second camp (based primarily on information from Cicero’s “On Ends” and an alternate reading of some of the same selections from Diogenes Laertius) contends that Anticipations are more analgous to the five physical senses.  This camp holds that just as with sight and hearing, Anticipations are a separate intuitive sense, endowed by Nature in the same way as men are endowed with vision or hearing.  In this view, Anticipations are a faculty which is capable of discerning evidence in the field of abstract relationships such as morality, justice, and the nature of gods.  If this view is correct, Anticipations do not consist of concepts previously evaluated by the mind any more than sights or sounds are stored up and evaluated in the eyes or ears.  This camp would hold that a man born without Anticipations could no more comprehend variations in justice or relationships with gods than a man born without eyes could comprehend variations in color or brightness.  The arguments of this camp are best represented by Norman Dewitt, who devoted Chapter 8 of his book “Epicurus and His Philosophy” to the proposition that Anticipations are faculty endowed by Nature as a separate and direct contact with reality.

Regardless of which of these camps is correct on the nature of Anticipations, it is clear that Epicurus consciously attacked the Platonic representation of “reason” as an abstraction that exists as the ultimate arbiter of truth.  In this way Epicurus exposed as error the Platonic view that reason alone can be used to invalidate the senses, or to reach any conclusions other than those that can be justified directly based on clear evidence from the senses.  The enemies of Epicureans distort this position and accuse him of not caring for logic, higher education, or most of the rest of the Academic world, and they disparaged him as uneducated.  That is why Cicero records that Epicurus:

“…refused to consider any education worth the name that did not help to school us in happiness. Was he to spend his time, as you encourage Triarius and me to do, in perusing poets, who give us nothing solid and useful, but merely childish amusement? Was he to occupy himself like Plato with music and geometry, arithmetic and astronomy, which starting from false premises cannot be true, and which moreover if they were true would contribute nothing to make our lives pleasanter and therefore better? Was he, I say, to study arts like these, and neglect the master art, so difficult and correspondingly so fruitful — the art of living?