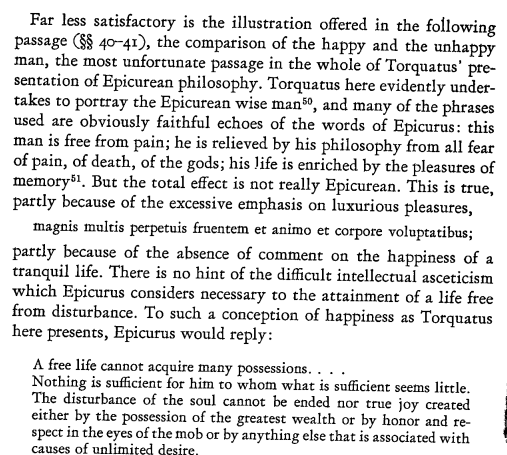 I don’t have time for as long a discussion as this deserves, but I want to highlight the attached excerpt from Edith Packer’s “Cicero’s Presentation of Epicurean Ethics.”  The topic is a key authority for our understanding of Epicurean Ethics, the presentation by Torquatus in Cicero’s “On Ends.”

In his discourse Torquatus states:

“The truth of the position that pleasure is the ultimate good will most readily appear from the following illustration. Let us imagine a man living in the continuous enjoyment of numerous and vivid pleasures alike of body and of mind, undisturbed either by the presence or by the prospect of pain. What possible state of existence could we describe as being more excellent or more desirable? One so situated must possess in the first place a strength of mind that is proof against all fear of death or of pain. He will know that death means complete unconsciousness, and that pain is generally light if long and short if strong, so that its intensity is compensated by brief duration and its continuance by diminishing severity. Let such a man moreover have no dread of any supernatural power; let him never suffer the pleasures of the past to fade away, but constantly renew their enjoyment in recollection, and his lot will be one which will not admit of further improvement.”

“But the total effect [of this passage] is not really Epicurean. This is true partly because of the excessive emphasis on luxurious pleasures …[and] partly because of the absence of comment on the happiness of the tranquil life. There is no hint of the difficult intellectual asceticism which Epicurus considers necessary to the attainment of a life free from disturbance.”

To this my personal reply to Packer is: “Fake news!”

We are today familiar with the term “fake news” from all sides of the political spectrum. As unpleasant as that subject is to discuss, a great liberating wind is sweeping through the twenty-first century in that people of all persuasions are coming to see that the “gatekeepers of truth” have never merited the trust that they have claimed for generations.

In deciding between Packer and Cicero we should ask:  Who had access to more Epicurean texts? Who had more access to Epicurean scholars? Who visited Athens at the height of Epicurean philosophy and learned from those who were committed to the philosophy? Packer or Cicero?

It is certainly possible that Packer is correct and Cicero is not.  But if Packer is right then we are looking not at innocent error, but in fact “Fake News” of the highest order, spun by a lawyer (Cicero) for purposes of undermining Epicurean philosophy. But would Cicero have dared to stretch his own credibility by writing such a distortion in a world filled with Epicureans amply equipped to dispute him?

My personal view is that Cicero (or the source from which he copied) was correct. Torquatus was accurately describing the Epicurean model of a life of pleasure as the ultimate good.  In turn, Packer is furthering the modern majority academic view – a great distortion which insists on viewing Epicurean philosophy through anti-Epicurean eyes.

Numbers of quotes can be marshaled on both sides of this issue, but my analysis starts with the premise that Epicurus expected others to understand that when he spoke of pleasure (which Torquatus has earlier stated is so plainly desirable that it needs no argument to support) he included in that term all types of pleasure, including those which some categorize as “of motion” and “static.” (I use quotes because I follow those who argue that these categories were not of great significance to Epicurus himself).

Most interpreters fail to explain to modern readers that Epicurus was speaking at a time and in a context where every educated person would understand the preliminary arguments.  The leading philosophers, especially Plato in his “Philebus,” had advanced the challenge that pleasure CANNOT be considered a candidate for the “highest good” or the “goal of life.”  Plato argued that this is true because pleasure (allegedly) has no “limit” – we always want more.  The Platonic argument concludes that nothing which has no limit (an “end point”) can be considered to be a “highest good” because no type or status of pleasure can be considered to be “the highest.”

Epicurus lived in a world that held Plato in great esteem, and so in disagreeing Epicurus logically would have formulated his theory of pleasure to defeat the Platonic argument.  Epicurus did that in large part by pointing out two major points:

(1) Nature gives living beings only two types of feelings: pleasure and pain.  Thus to a living being experiencing any feelings at all, the absence of one amounts to the presence of the other.  If we could measure the total experience of any living being at any time, the “absence of pain” that being was experiencing would constitute in quantity the exact measure of the amount of pleasure that being is experiencing.  Why is this important? Because:

2) The Platonic objection that pleasure has no limit is wrong.  In contrast to false and speculative models such as are specialized in by idealists, Epicurus suggested that we consider life as a vessel, with the liquid content of the vessel being all of the numerous types of pleasure that are available in life.  A vessel (like a man) is a real thing, and a vessel can be filled to the top with liquid, just as a life can be filled with pleasures.  After the vessel is filled, all that is then poured into it amounts only to variation, not an increase in the quantity or quality of pleasure. Thus the use of terms like purity, absence of pain (aponia) and smoothness / tranquility (ataraxia) are only descriptive adjectives/adverbs for the desirable state of maintenance of a vessel:  that of holding its contents filled to the top, without leaking, overflowing, or under-filling.

Seen in these terms, the goal of life thus defined is not a “higher” or “mysterious” state of pleasure different from that which people ordinarily understand as pleasurable, and this goal requires no opaque terminology to describe it. Rather, the desired state / highest life –  the model which serves as a guide, is that of a life experienced when filled to the top with pleasures of all kinds, a life conducted as most nearly possible without leaking or spilling (ataraxia for those who must use a Greek word) or under-filling (aponia).

So in my view Cicero was right and Packer was wrong. The goal of life identified by Epicurus was just as testified to by Torquatus, the same goal aptly summarized separately by Cicero himself: “a life of tranquility crammed full of pleasure.”

Previous ArticleA Response To: “How Would Epicurus Account For Depression?”
Next ArticleTakis Panagiotopoulos: “How Became Known To Us The Portrait of The Athenian Philosopher Epicurus”