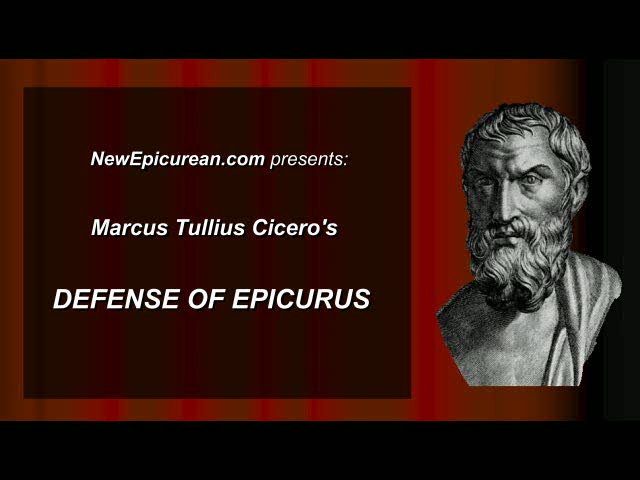 I have mentioned on this blog before that Charlton Griffin’s audiobook recording of Lucretius’ On The Nature of Things was my real introduction to the world of Epicureanism.  I have listened Griffin’s presentation over and over as the years have passed, and they have helped immeasurably in my understanding of Epicurean theory.  I have frequently wished that I had access to other recordings of Epicurean material, both to assist in sharing the ideas with others and to reinforce my own application of them.  I have often considered how best to organize the core material for presentation, but whenever I tried to think of the best way to proceed, I always returned to the same point:  the example set by Cicero in his “Defense of Epicurus,” as contained in his work On The Ends of Good and Evil.

In the form of Torquatus’ lengthy presentation, Cicero left to us one of the most eloquent summaries of Epicureanism ever written.  It is likely that Cicero’s text was itself a rewrite of existing Epicurean material, and it is interesting to consider how much of the text is Cicero’s and how much originated with Hermarchus, Metrodorus, or even Epicurus himself.  Regardless of its origin, the result is a compelling presentation of the fundamentals of Epicureanism, as it contains the core argument that all who take Epicurus seriously should be prepared to understand and deliver.

And so today I am launching on NewEpicurean.com a new audio/video version, based on Cicero’s text as I have adapted it from the 1914 version of Harris Rackham’s translation as posted here.    I hope those who come across this presentation get some benefit from it, but more importantly for the mission of this page, I would like it to serve as an encouragement to others to produce similar presentations.  As I have learned from Charlton Griffin’s example, it is one thing to read Epicurean literature, but it is quite another to hear Epicurean argument delivered in the immediacy of the human voice — the medium in which it was originally delivered in the ancient Roman and Greek world.  It  was through real human voices – male, female, young, old, and in many national accents — that many in the ancient world came to understand that Epicureanism was a philosophy for living, and philosophy to be applied, not simply read about and debated in some academic ivory tower.

As a means of encouraging the development of other presentations, I am thinking of promoting a “contest,” and I would appreciate your feedback.  As a start, I am thinking of providing some small incentive for those who might be interested in recording their own version of Cicero’s “Defense of Epicurus,” with the goal that one or more of those versions would be posted here (or linked from here) for the enjoyment of others (and myself)!

I have no idea whether interest in Epicureanism today is anywhere near sufficient to succeed with this project, but I do know how much I have profited immensely from hearing the Charlton Griffin recordings.  Even though the version of Cicero’s “Defense” posted here pales in comparison with his booming voice, internalizing the argument and delivering it oneself is an excellent way to gain a deeper appreciation for Epicurus’ philosophy.

Anyone who reads this far into this blog entry is encouraged to write me by email (or by Facebook email) and let me know their thoughts.  If I proceed, here are some possible ground rules:

1)  The target would be to produce creative audio versions of Cicero’s presentation (as transcribed on the NewEpicurean page here) for linking here on this website as an educational aid to fans of Epicurus.  As with all material presented on this website, I claim no copyright on the text I have adapted from Rackham.  Everything on this page is presented to the public in appreciation for the benefit I have myself received from the study of Epicurus.  Because of this, anyone who submits an entry would need to expect that entry also to reside in “the public domain” and be freely downloadable or accessible on such sites as Vimeo, Youtube, etc.  Video submissions would be encouraged, but as audio is easier to prepare, audio mp3 version would be fully satisfactory.

2) All submitters  would remain anonymous or be credited publicly, at his or her preference.

3) Submissions should be in English only (at first, anyway), as that is the only language I can understand!

4) My resources are limited, but for the first three submissions that are acceptable for posting here, I would be happy to reward each submitter with a $50.00 gift certificate to Amazon.com or some similar method of reimbursement.  This amount would of course be small compensation for the time needed to produce a quality audio presentation (much less a video presentation), but the ultimate reward would come from the pleasure of producing it, and the knowledge that your work would be of assistance to the goal of encouraging the study of Epicureanism.

Again, I have no clue whether anyone will be interested in such a project, so as indicated, please contact me by email to let me know that you are considering making a submission.  That way I can answer any questions and avoid any misunderstandings before someone invests the time to produce the audio file.

Regardless of whether you choose to participate in this “challenge,” I hope you get some benefit from the attached presentation, and that it will assist you in remembering these immortal words:

In sum, then, the theory I have set forth is clearer and more luminous than daylight itself. It is derived entirely from Nature’s source. My whole discussion relies for confirmation on the unbiased and unimpeachable evidence of the senses. Lisping babies, even dumb animals, prompted by Nature’s teaching, can almost find the voice to proclaim to us that in life there is no welfare but pleasure, no hardship but pain – and their judgment in these matters is neither corrupted nor biased. Ought we then not to feel the greatest gratitude to Epicurus, the man who listened to these words from Nature’s own voice, and grasped their meaning so firmly and so fully that he was able to guide all sane-minded men into the path of peace and happiness, of calmness and repose?

You amuse yourself by thinking that Epicurus was uneducated. The truth is that Epicurus refused to consider any education to be worthy of the name if it did not teach us the means to live happily. Was Epicurus to spend his time, as you encourage Triarius and me to do, perusing the poets, who give us nothing solid and useful, but only childish amusement? Was Epicurus to occupy himself like Plato, with music and geometry, arithmetic and astronomy, which are at best mere tools, and which, if they start from false premises, can never reveal truth or contribute anything to make our lives happier and therefore better?

Was Epicurus to study the limited arts such as these, and neglect the master art, so difficult but correspondingly so fruitful, the art of living? No! It was not Epicurus who was uninformed. The truly uneducated are those who ask us to go on studying until old age the subjects that we ought to be ashamed not to have learned when we were children!

Previous ArticleReflections on Epicurean Ethics
Next ArticleLove, Marriage, and the Epicurean in the Modern World