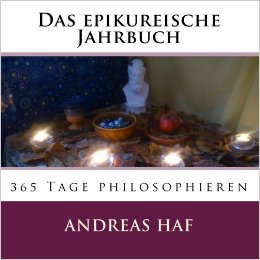 Tonight I am happy to help announce that Andreas Haf, a student of Epicurus with whom I have corresponded for over a year, has released on Amazon a new book entitled “The Epicurean Yearbook.”  Unfortunately for me, the book is in German, and as I have not seen the book nor can I read a word of German, there is not much about it I can relate at this point.  Here is Andreas’ post in the Facebook Group announcing the book,  and here is the book’s Amazon page.
However in addition to the table of comments referenced in the Facebook group post, Andreas has assisted me in translating the opening selection, which reads as follows:
“Epicurus every day!”
Since the revival of my enthusiasm for the philosophy of the garden, the question has preoccupied me why in academic discussion Epicurus and his arguments find little attention.   The basic statements of his natural philosophy and ethics have found conclusive evidence,  and its stated aim is , by means of research and theory, to approach the essence of the world.
The Epicurean way of life is directly derived from experience of the environment.   You will learn not as a stranger or as one who is overcome by reality, but in a framework in which the individual is realized.
As the student of Epicurus strives to live according to the nature of things, he finally overcomes internal and external contradictions. He is one with the world, and in its operations.  He recognizes himself — and dualism turns into one.
This transformation must succeed not only in scientific terms, or on a theoretical abstract level, but also in life.  Thus from the practical sense, applied to experience, Epicurus derived guidelines which focus directly on the implementation in daily life.
These are less dogmatic doctrines, which rather than refer to ultimate truths serve as  groundbreaking thoughts that lead the student on his journey.
The Master gives the student the key in hand, by which the student opens the door.
About 1700 years before our time the key was buried. The active tradition of the Epicurean school was extinguished.  Where once disciples celebrated masters and teaching in immortal verses, and immortalized the philosophy in the biggest inscription of the Ancient World,  those lines are now faded, centuries have passed, and the philosophy of joy has fallen into oblivion.
The garden and its wisdom were eventually reborn.  In the Renaissance we finally discovered it again, with the Enlightenment bold thinkers began to beat a path through the undergrowth to free themselves from the weeds. The paths and arbors that had expired long ago became unrecognizable in the concrete of the modern world, but are still visible in their foundations.
Modern science struck its roots into ancient Earth. The surface, however, the once-dominant side of the garden with its transformational paths, fragrant shrubs and shady trees, the flower beds and benches – in other words everything that once flourished and on which the art of life could meditate – was still broken.  Archaeologically secured and buried in historical encyclopedias, Epicurus became what he is today:  A historically interesting but outmoded philosophy without any practical relevance, paid respect only in books.
The story also was once stamped with a vibrant and innovative mindset.  While the conversation, the exercise, and the development of the personality in mental attitude, all towards a steadfastness and joy of life were authoritative content of the Epicurean  lifestyle, the philosophical practice that supported it has remained buried.  These are precisely the components, the grounds of a belief which can tap into its environment: “What I touch, what resists me – that I understand.”(Albert Camus)
Epicureanism is a system based on the fundamental insights and teachings of the school’s founder- a program to put the living back on their feet and give them a natural foundation and basis in the human experience.  In this effort today, the student must act as a modern Epicurus to capture the essence that goes deeper than the historical framework to convey to the modern age.  Those who follow the path of internal perspective find that the controversies that face outside observers are largely irrelevant.  The recovery of self-referentiality, along with a new foundation of practice, is a crucial step on the road to renewal of the garden.  For a long time the purely descriptive perspective has prevented a replanting.  The sense of a philosophy, however, is to be lived – although in Epicurean thought the academic approach undoubtedly plays an important role.  Piece by piece, the student of Epicurus can establish a genuine philosophical foundation that will provide guidance and companionship.
This Epicurean yearbook is a building block in that bridge.
—————–
Sounds great!
I wish Andreas well with this project and hope to have more to report on it soon.

Previous ArticlePeace and Safety For your Twentieth of October: Two Ways of Looking At Decision-Making
Next ArticleNew Table of Contents / Finding Aid For “A Few Days In Athens”