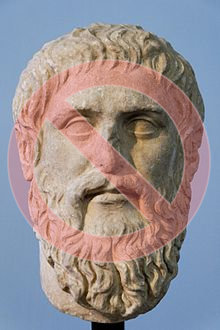 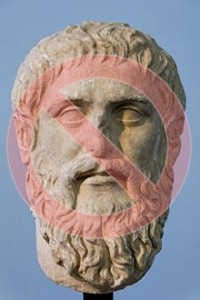 May Plato’s God of Reason forgive me for posting this link, but if asked I will respond that his God fated me to do it!  I recently came across the short five minute video on Stoicism linked below.  Of course Stoicism is not the same as Platonism, and it is difficult to define philosophies which have multiple figures and lack the kind of orderly list of “Principal Doctrines” that Epicureans developed.  Nevertheless, it is important to know the history of where we are and how we got here, and this short video packs in a lot of helpful information.
I have prepared the following summary of the major points which the video represents as core Stoic ideas.  Until such time as I can prepare an exhaustive list of “official” Stoic positions with citations, this video will have to suffice.  Play it for yourself and compare it to what you read in Epicurus.   Here are eight major points that caught my ear:
(1) You don’t have to give in to your feelings, you can REPRESS them!
(2) What men do best is “think” – (ah the blessings of pure reason unencumbered from the body!)
(3) Our lives have significance because we should think of ourselves as part of the “great arc of time.”
(4) Stoicism is a philosophy not for ordinary people, but to a philosophy to make us “saints.”
(5) There is a god of reason behind the creation and operation of the universe, and that god drives everything, and indeed has FATED us to do all that we do and be all that we are.
(6) “To a Stoic, pain and pleasure are the same. If we train our minds to use reason we can learn to be free from pain and pleasure.”
(7) “There has got to be something else (more than pleasure) worth living for!”
(8) Whether things in our lives hurt or not, or whether they are pleasurable or not, REALLY DOESN’T MATTER because in the end we are all “part of the same flow.”A few times you hear echoes of familiar Epicurean thoughts, but if you think about it, those periodic echoes really don’t make sense if these fundamental principles of Stoicism are really true.
Students of Epicurus need to know that his ideas did not develop in a vacuum – they had a very important context of an opposing viewpoint against which they were rebelling.   And it is also essential to know that this opposing viewpoint exists today, with only minor changes.  Much (not all!) of modern philosophy is a heritage of Stoicism and Christianity, with their ideas of suffering, afterlife, other dimensions, suppression of the individual desire for pleasure, and many more core views.  These views are a continuation of those most notably associated with Plato, and when Epicurus developed  the principal doctrines, he developed MANY of them as direct refutations Platonic principles.  Those same Platonic principles were retained in modified form by Stoics and Christians and other schools — and from their common core we have the affinity these schools have for each other, and the source of their shared / joint condemnation of Epicurus.

In contrast to the eight points set out at the beginning of this post, Epicurus held the following (this list was prepared by a friend on Facebook who I am glad to credit but I think would prefer that I not!):

(1) Feelings are an important and natural way animals relate to their environment (2) Human thinking leads men to all sorts of different conclusions, some very absurd. The senses are a more immediate way of understanding.(3) Our lives have significance because we give it significance.(4) Philosophy is for everyone, and you can happily be a common person and benefit from philosophy(5) There are no gods (*that take an interest in our lives), no fate, and we are not deterministically bound. (6) Pleasure is better than pain.(7) There is no big or grand scheme or goal we must live for, and if we measure our life by some grand scheme we think up, we will fall short.(8) What is painful to humans is the only natural evil—some men try to think it away, some men try to think it is personified—but it is just your physical animal body telling you what you need and what will harm you.

And here is the same list of eight points with responses based on cites to the ancient Epicurean texts:

Previous ArticleEpicurus On The Meaning of “Good”
Next ArticleExplaining the True Nature of Life as a Pleasure: The Example of the Statue’s Hand