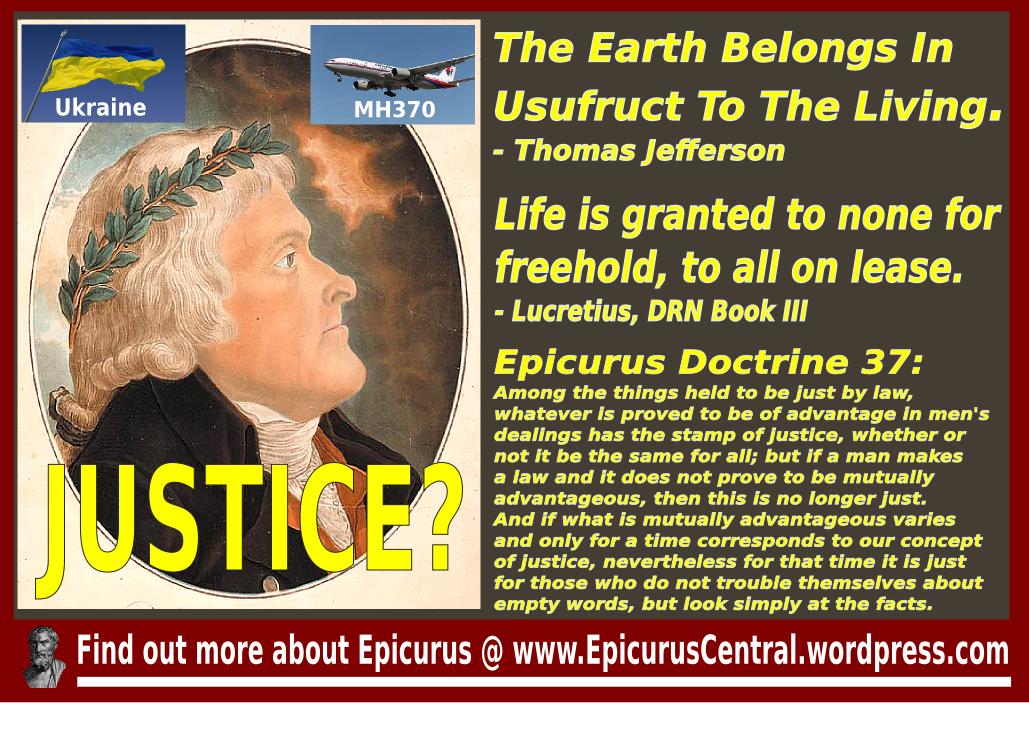 As I write this, the crises surrounding MH370 and the Ukraine are unresolved and unpredictable.  As these events unfold, I think it is useful to consider how the concept of “Justice” applies to them.   Who is “right”?  Who is “wrong”?  Is that even the proper way of analyzing things?

A phrase of Thomas Jefferson keeps coming to mind:  “The Earth belongs in usufruct to the living.”  That has an odd ring to modern ears, as few but property lawyers use the term “usufruct” nowadays to refer to temporary right to possession of property.

The Cyril Bailey translation of Book III of Lucetius’ On The Nature of Things rings in more familiar terms:  “Life is granted to none on freehold, to all on lease.”

Both these sentiments derive from Doctrine 2 of Epicurus, the famous “death is nothing to us.”  But they also derive in part from Doctrine 1:  “A blessed and indestructible being [meaning any “god”] has no trouble himself and brings no trouble upon any other being; so he is free from anger and partiality, for all such things imply weakness.”  This doctrine means among many other things that there is no supernatural  enforcer of property rights, individual rights, or any other kinds of rights – no god gives rights to any particular property; nor does he defend such rights or take them away.

And what is the implication of all this for Justice?  This is explained in Doctrines 31-37:

31. Natural justice is a pledge of reciprocal benefit, to prevent one man from harming or being harmed by another.

33. There never was such a thing as absolute justice, but only agreements made in mutual dealings among men in whatever places at various times providing against the infliction or suffering of harm.

34. Injustice is not an evil in itself, but only in consequence of the fear which is associated with the apprehension of being discovered by those appointed to punish such actions.

35. It is impossible for a man who secretly violates the terms of the agreement not to harm or be harmed to feel confident that he will remain undiscovered, even if he has already escaped ten thousand times; for until his death he is never sure that he will not be detected.

36. In general justice is the same for all, for it is something found mutually beneficial in men’s dealings, but in its application to particular places or other circumstances the same thing is not necessarily just for everyone.

37. Among the things held to be just by law, whatever is proved to be of advantage in men’s dealings has the stamp of justice, whether or not it be the same for all; but if a man makes a law and it does not prove to be mutually advantageous, then this is no longer just. And if what is mutually advantageous varies and only for a time corresponds to our concept of justice, nevertheless for that time it is just for those who do not trouble themselves about empty words, but look simply at the facts.

38. Where without any change in circumstances the things held to be just by law are seen not to correspond with the concept of justice in actual practice, such laws are not really just; but wherever the laws have ceased to be advantageous because of a change in circumstances, in that case the laws were for that time just when they were advantageous for the mutual dealings of the citizens, and subsequently ceased to be just when they were no longer advantageous.

In sum, Nature gives us our existence and our world in usufruct.  Our lives and our property are not ours in perpetuity, not on freehold, but on lease.  We have no power over future generations, and this means that justice must be determined among the living.  Justice does not exist in the abstract or as a self-enforcing power – it is a relationship of mutual happiness among living men.  As to us, it has no enforcing judge other than ourselves; we must assert and protect our own right to happiness if we expect that right to be honored by anyone else.

Whether in the Ukraine, or in Malaysia with flight M370, justice exists only in the relationships between living people.  Those who came before as the ancestors of present-day Ukrainians and present-day Malaysians have no present role to play in enforcing justice.  There is no supreme being in heaven taking notes to enforce justice now or later.  It is up to living Ukrainians, living Russians, living Malaysians, and living Chinese to determine what is just between them and to enforce that relationship.

Plutarch records a sad example of this point in the words of Cassius Longinus to Brutus, shortly before their army was destroyed at Phillipi by Anthony and Octavian.  Cassius, seeking to calm the nerves of Brutus, who dreamed that he had seen Caesar’s ghost, said to him:

But that there should be any such thing as supernatural beings, or, if there were, that they should have human shape or voice or power that can reach to us, there is no reason for believing; though I confess I could wish that there were such beings, that we might not rely upon our arms only, and our horses and our navy, all which are so numerous and powerful, but might be confident of the assistance of gods also, in this our most sacred and honourable attempt.”

Whether or not the side of Brutus and Cassius in that conflict was sacred and honorable may be debated, but it is certain that Cassius and Brutus believed it to be so.  Regardless of their belief, no enforcing and protecting deity rode to their rescue, and shortly thereafter they both lay dead and their forces defeated, their ends decided by the living human beings who participated in the battle.

The point of all this?  The world belongs to the living.  If we ourselves do not pursue happiness and defend our right to do so, we can expect no protecting deity, no force of “justice,” to do it for us.  What was considered “right” in generations past has no protective force to ensure its existence.  We take action to transmit our values and our way of live to our children and to future generations, or those values and ways of life die away, replaced by whatever happens to take its place.  The atoms are always in motion, and only action to maintain the order of that motion can sustain any order for any length of time.

Is this nihilism?  Is this total relativism?  No, it is neither.  Epicurus identified the one sure rock by which we can evaluate these issues, and that rock never changes.  Justice changes with the times and with circumstances, but the one principle around which justice always revolves is:   the happiness of the individuals concerned.

No consideration, no force, no “virtue,” no religion, no “idea” of any kind trumps the guide that Nature has provided – the faculty of pleasure.  To follow pleasure rationally is not “hedonism”  but simple obedience to Nature, and there is no higher calling.

If you think “glory” is missing from all this, consider what Cassius wrote to Cicero in 45 BC:

Consequently Pansa, who follows pleasure, keeps his hold on virtue, and those also whom you call pleasure-lovers are lovers of what is good and lovers of justice, and cultivate and keep all the virtues.

UPDATE1:  One thing I didn’t get into the main post is that this view of Justice seems to be precisely the OPPOSITE of the Stoic/Platonic view as stated by Cicero:

“There is in fact a true law – namely right reason – which is in accordance with nature, applies to all men, and is unchangeable and eternal. By its commands this law summons men to the performance of their duties. By its prohibitions, it restrains them from doing wrong. Its commands and prohibitions always influence good men, but are without effect upon the bad.

“To invalidate this law of human legislation is never morally right, nor is it permissible ever to restrict its operation, and to annul it is impossible. Neither the Senate nor the people can absolve us from our obligation to obey this law, and it requires no Sextus Aelms to expound and interpret it. It will not lay down one rule at Rome and another at Athens, nor will it be one rule today and another tomorrow.

“But there will be one law, eternal and unchangeable, binding at all times and upon all peoples; and there will be, as it were, one common master and ruler of mankind, namely God, who is the author of this law, its interpreter, and its sponsor. The man who will not obey it will abandon his better self, and, in denying the true nature of a man will thereby suffer the severest of penalties, though he has escaped all the other consequences which men call punishments.”

In much of this the contrast could not be starker – as if Cicero wrote it with Epicurus in mind to argue against him – it is the opposite of Epicurean views of justice! 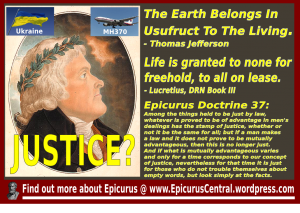 Previous ArticleMore Thoughts On The Limits of Simple Living
Next ArticlePeace, Safety, And Good News For your Twentieth of March – The Translation of Lucretius You Want For Your Library Is Now In EPUB!