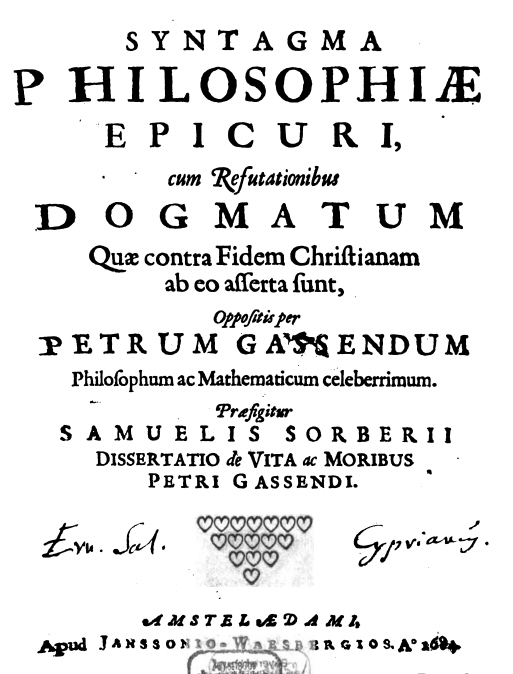 NOTE:  THIS POST HAS NOW BEEN SUPERSEDED BY THE INFORMATION HERE.

In 1819 Thomas Jefferson wrote, as part of his letter to William Short:

I have sometimes thought of translating Epictetus (for he has never been tolerably translated into English) by adding the genuine doctrines of Epicurus from the Syntagma of Gassendi….,

If anyone is aware of an English translation of Gassendi’s complete work, I would appreciate your letting me know!

In the meantime, in an awful, terrible, and inexcusably poor translation from Latin to English, here is my rendering of the Table of Contents of Gassendi’s work.  I have included a number of question marks where my translation is particularly poor, but don’t let those fool you – the entire translation is awful!  However, it’s enough to at least identify that the First and Third parts of Gassendi’s work are of particular interest:

Syntagma Philosophiae Epicuri  – The System Of the Philosophy of Epicurus

Editor’s Preface and Life and Death of Gassendi

On the Philosophy as a Whole

PART FIRST, Which is Canonics, Or, On the Criterias

Chapter I –  On Truth, Illustrating the Criteria

Chapter II, The Canonics of the senses as the first Criteria

Canon I – The Senses Never Fail……

Canon II – Opinion is a consequence of the sense, and Sensation is the ____ in which Truth And Falsehood Falls

Canon III – That opinion is true which is supported by, and not contradicted by, the evidence of the senses

Canon IV – That Opinion is false which is neither opposed nor supported by the evidence of the senses.

Chapter III, The Canons of The Prenotions, Anticipations as the Force of the Other Criteria

Canon I – All which is in the mind as Anticipation, or Prenotion, depends on the senses, and that either by incursion, or proportion, or similarity, or by composition ??

Canon II – An Anticipation is itself a thing of inquiry, and as it were a definition, the limit beyond which anything to question, to doubt, to speculate and indeed to name is not allowed.

Canon III – It is the Anticipation in all reasoning principle, as it were indeed,  which attends and brings about that one is the same, or different, or connected, or disconnected from others.??

Canon IV – That which is against the evidence, or that which is from an evident thing, should be demonstrated by an Anticipation

Chapter IV – The Canon of the Affections, or the Passions, the Last of the Criteria

Canon I – That which is Pleasurable, which in no way has annexed trouble, is to be embraced.

Canon II – That which is troubling, which has no pleasure annexed, is to be fled.

Canon III – That which is pleasurable, but either a greater pleasure impedes, or a greater trouble begets, is to be fled

Canon IV – That which is troubling, but which either a greater trouble averts, or an abundant pleasure creates, is to be embraced.

Chapter V – The Canons Concerning the Use of the Voice

Canon I – When you Speak, select common words, and evident; not those which are unfamiliar or veiled, or frustrate timely comprehension.

Canon II – When you listen, strive toward it so that you grasp the subject in words, do not allow the force to lie hidden in obscurity,  indeed by ambiguity they are deceived.

PART SECOND of the Philosophy, Which is Physics, or On Nature

First Section – On the Universe, Or On The Nature of Things

– The Objection of Epicurus to the Immortality of the Spirit Refuted; which from the first passes over his assertion that there is nothing else incorporeal admitted than void

– How the Sense of the Appearance is by which we Apprehend God; where second we pass over the preceding assertions of Epicurus

Observation I – Can it be that this world is the only such one in the Universe?

Observation II – Is God the Author, or the Cause Producing the World?

Observation III – Is God the Director, or the Cause governing the World?

Chapter III – On The Divinity of the Natural Universe

Observation – In what way is god perfectly understanding.

Observation II – Given that among the causes one is first of all; or that which is, is God

Observation III – On the Use of the Parts in the Spirits ???

Chapter IV – On the Basic Material, Or on the Principles of the Formation of the Universe

Chapter V – Given in Nature of things are atoms, what are the formation of the first principles.

Observation – That which exists, and which is by necessity the principle material; the first materials examined

Chapter VI – On the Atoms’ properties, and first magnitudes

Chapter VI – On the shapes of the atoms

Chapter VIII – On the Gravity, or Weight, and multiple motions of the Atoms

Chapter IX – Atoms, not common Elements, or “Like-partedness” are the first principles of things.

Chapter X – On the First, and on the Radical Compacting Cause; this is, by Agency, or by Effect

Chapter XI – On the motion, indeed with Action, is effected; and on Fortune, Fate, Ends, and Similar Things, and on Opposing Causes

Chapter XII – On the coming together of things and the qualities borne.

Chapter XIII – On the qualities of Atoms and their apparent accompanying substance; and their separation from the void

(Chapter Fourteen is missing from this scan)

Chapter XVIII- On those things on account of the beginnings, the body in certain this is born, and discerned from certain things

Second Section – On the World

Chapter I, On the Form and Figure of the World

Chapter II – On the Newness of the World

Chapter III – On the Cause of the World

Chapter IV – On the Coming Forth of the World

Chapter V – On the Death and Change of the World

Chapter VI –  In Passing, On Spirits and Demons

Pierre Gassendi Refutation:  That which the sense of divinity, or preconception of future things by pure fortune

Chapter VII – On the End, or The Perishing of the World

Chapter VIII – On the Infinity of the Universe

Chapter II – On the Worlds’ motion, or passing of the eternal fire

Chapter III – On Seas, Rivers, Fountains, and the Flooding of the Nile

Chapter IV – On Water’s Occasional properties, and on Glaciers

Chapter V – On The World and Inanimate things

Chapter VII – On the generation of Animals

Chapter VIII – On the Use of the Spiritual Part

Chapter IX – On the Spirit, From which animals are formed or studied

Chapter X – On Sense, which is of the Spirit as if Spirit, universally

Chapter XI – On Vision, and On Images in themselves occurring

Chapter XVII – On the Spirit, And Intellect, the Mind, and the Residence of Reasoning

Chapter XVIII – Nothing reflects on the Spirit unless through images incurring

Chapter XIX – On the Affections, or the Passions of the Spirit

Chapter XX – On Voluntary Motions, and in particular on the imposition of names and speech

Fourth Section- On Threshold Things, On Celestial Things, and Those in the Air

Chapter I – On Lesser Things, and On the Variety of The Stars

Chapter II – On the Size and Shape of the Stars

Chapter V – On The Light of the Stars —- and the Moon

Chapter VII – On the Precession of the Stars

Chapter X – On The Winds, and Waterspouts

Chapter XII – On Lightning and Thunder

Chapter XIII – On Rain and Due

Chapter XV – On Rainbows and Halos

PART THIRD – On Ethics, and On Morals

Chapter I – On Happiness, or the end of goods things, and how far toward this man is capable.

Chapter II – Pleasure without which notion happiness is nothing, the thing which is nature’s good.

Chapter III – The Whole of Happiness consists in Pleasure

Chapter IV – Pleasure, In Which Place Happiness is, To Be Freedom From Pain of the Body and Tranquility of Mind

Chapter V – Of Those things In which Happiness and Pleasure are borne, so with first Virtues are.

Chapter VI – From The Guidance of Reason, and from Free Judgment, all praise of Virtue is

Chapter IX – On Prudence In Private

Chapter XII – On Temperance as a Whole

Chapter XIII – On Sobriety against Appetite

Chapter XIV – On Moderation against Excess

Chapter XV – On Gentleness Against Anger

Chapter XVI – On Restraint Against Ambition

Chapter XVII – On Moderation Against Avarice

Chapter XVIII – On Moderation against Hope and hopelessness against the future

Chapter XIX – On Courage In general

Chapter XX – On Courage as it concerns fear of the Gods

Chapter XXI – On Courage as it concerns fear of death

Chapter XXII – On Courage Against Pain of the Body

Chapter XXIII – On Courage Against Disease of the Spirit

Chapter XXIV – On Justice in General

Chapter XXV – On Justice, and in what Justice is said to Consist

Chapter XXVI – On the origin of Law, and Justice

Chapter XXVII – That which is against the law, and the changing of Justice

Previous ArticleA word on the status of the Lucian ebook.
Next Article“I love you too well to leave you to the company of a life-long dream.”