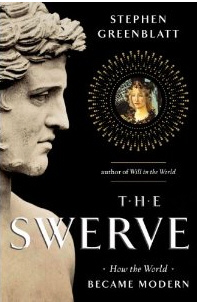 This clip comes from this page at bigthink.com.

Mr. Greenblatt is doing an outstanding job of re-popularizing De Rerum Natura, and he covers many critical points in this brief presentation.

It’s also interesting to consider what else a fan of Epicurus might consider adding to a summary like this.

One thing that comes to mind would be to also mention the concepts in Principle Doctrines 3, 9, 18, and especially 19 and 20, to the effect than an infinite lifespan is not necessary to experience a full and happy life.  Just as Lucretius lamented himself, those who are exposed to Epicurean ideas for the first time are likely to recoil from the loss of the (false) promise of eternal life.  It therefore makes sense to start early to acquaint new students with the remedy for this false concern:  the knowledge that Nature neither allows, nor requires, an infinite span of time in order for us to succeed in living full and happy lives.

Doctrine 19. If we measure the limits of pleasure by reason, infinite and finite time both provide the opportunity for complete pleasure.

Doctrine 20. We assume that physical pleasure is unlimited, and that unlimited time is required to procure it.  But through understanding the natural goals and limits of the body, and by dissolving the fear of eternity, we produce a complete life that has no need infinite time.  The wise man neither flees enjoyment, nor, when events cause him to exit from life, does he look back as if he had missed any essential aspect of life.

Letter to Menoeceus: Many people, however, flee from death as if it were the greatest of evils, while at other times these same people wish for death as a rest from the evils of life. But the wise man embraces life, and he does not fear death, for life affords the opportunity for happiness, and the wise man does not consider the mere absence of life to be an evil. Just as he chooses food not according to what is most abundant, but according to what is best; so too, the wise man does not seek to live the life that is the longest, but the happiest.  And so he who advises a young man to live well, and an old man to die well, is a simpleton, not only because life is desirable for both the young and the old, but also because the wisdom to live well is the same as the wisdom to die well.  Equally wrong was the man who said: ‘Tis well not to be born, but when born, tis well to pass with quickness to the gates of Death.’ If this was really his opinion, why then did he not end his own life? For it was easily in his power to do so, if this was really his belief. But if this man was joking, then he was talking foolishly in a case where foolishness ought not be allowed.

Another thing that I would suggest an introduction to Epicurus cover is a topic related to a subject that I am very pleased to see is NOT in this summary:   Unless I missed it, Greenblatt never uses the word “random” (or “accidental”) in this presentation.  I find this to be important because I think some fans of Epicurus tend to emphasize that the points Greenblatt raises here necessary equate to an “anything goes” view of life, because they reason — if the atoms combine accidentally and randomly — what may be true or not true today may certainly may be true tomorrow, as soon as the atoms recombine!

As I have blogged previously, I think this is a very serious error, which Lucretius attempted to squash early on in De Rerum Natura, as seen here in Book I:

When human life – before the eyes of all – lay foully prostrate upon the earth, crushed down under the weight of religion, which glowered down from heaven upon mortal men with a hideous appearance, one man — a Greek — first dared to lift up his mortal eyes and stand up face-to-face against religion. This man could not be quashed either by stories of gods or thunderbolts or even by the deafening roar of heaven. Those things only spurred on the eager courage of his soul, filling him with desire to be the first to burst the tight bars placed on Nature’s gates. The living force of his soul won the day, and on he passed, far beyond the flaming walls of the world, travelling with his mind and with his spirit the immeasurable universe. And from there he returned to us – like a conqueror — to tell us what can be, and what cannot, and on what principle and deep-set boundary mark Nature has established all things. Through this knowledge, superstition is thrown down and trampled underfoot, and by his victory we are raised equal with the stars.

This is one of the most clear examples of a point that is made throughout De Rerum Natura — that some things are possible, and some are not — due to the eternal unchanging characteristics of the atoms, which vary in many ways indeed, but do not vary infinitely.  While the number of possibilities of combinations of atoms are certainly many and varied, they are not infinite, and neither are they random.  This may seem to be quibbling with words, but in a world where “anything is possible” is well-worn cliche, it is important to observe that “anything” is not possible.

And to mention one more topic that I think is helpful to clarify:  let’s dismiss once and for all St. Paul’s familiar slander that the atoms (the “elements”) are weak and beggarly (Galations 4:9).    When we say that the soul is made out of atoms, we do not imply that we know the full nature of the atoms, and that the atoms are essentially “dirt.”  The defining characteristics of the atoms are essentially that they are indivisible and eternal; beyond that — even when we discuss shapes or sizes — we are truly moving into speculation.  And one of the core principles of Epicurean thought, such as contained in Doctrines 24 and 25, is that we must never assume that we know something with certainty when the evidence is insufficient to justify that conclusion.  To consider the atoms as weak and beggarly is a slander of religion, not an accurate assessment of the essential material of the universe which has produced the wonders we behold every day.

Previous ArticlePeace and Safety For Your Twentieth of September! – A listening suggestion.
Next ArticleMore Thoughts on Presenting The Basics of Epicureanism