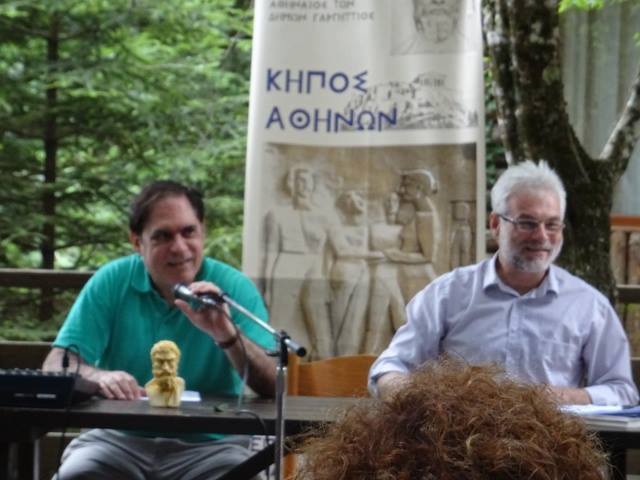 [Note:  The following is an exchange recently held on the Epicurean Philosophy Facebook Group.  I have edited down the number comments to keep the thread more focused.  I plan to curate this into better form, but I want to go ahead and post the main structure.]

July 27, 2017:   Elli:  In the favor of this FB group of friends of Epicurean philosophy, I asked our epicurean friend Christos Yapijakis to translate in English language his paper work from the event at Promethea, because I think that it was the best among the bests.

For the friends of Epicurean philosophy, Re-Hellenization is the emergence of the best ingredients of Humanism, according to the essence of Epicurus’ saying “friendship dances around the world summoning us all to awaken to the recognition of happiness” (Sententiae Vaticane 52). In antiquity, the Epicurean philosophy was panhuman and universal, the first worldview which embraced people of all age, gender, ethnicity and social order, men and women, rich and poor, free people and slaves. In addition to Epicurus’ disciples of Hellenic (Greek) origin, Epicurean teachings influenced Syrians like Mithres and Lucian, Romans like Lucretius and Piso, Hellenized Jews like most Sadducees and the writer of Ecclesiastes, Carthaginians like Terentius, and Celts like Catius Insuber. Irrespective of ethnicity, all Epicureans in antiquity were Hellenized and humanized. After the barbaric interval of a thousand medieval years, the same trend of Re-Hellenization and Humanization continued from the Renaissance to the present day. As Isocrates wrote, Hellene (Greek) is anyone who participates in Hellenic humanitarian education. And not someone who has the mythical and non-existent ‘Hellenic DNA’ as some idealists claim unscientifically…

The purpose of Hellenic humanitarian education is eudaimonia (happiness). According to the Epicurean philosophy, the blissful life, in other words the pleasurable state of living, cannot be achieved by someone without prudence, without virtues and without justice, that is to say without having the right way of thinking. The way of thinking is of great importance, since it represents the methodology used by someone to analyze the information one receives from the environment. There is the right way of thinking, the Epicurean one, based on the best use of natural human abilities, on the perception of senses and emotions, but also on calm, objective and educated reasoning. This is the way of thinking based on empirical, naturalistic, and ultimately scientific knowledge of the world, according to the moto “senses come first”.

On the contrary, the wrong ways of thinking do not lead to blissful life, but lead instead to confusion and barbarity.

The erroneous ways of thinking may be divided into two categories, the systematically wrong mentality and the foolishly misguided mentality. The systematic error, as it is called scientifically, is the way that may lead to disastrous results if we do not avoid it. The Epicurean Roman Lucretius points out: “Again, as in a building, if the first plumb-line be askew, and if the square deceiving swerve from lines exact, and if the level waver but the least in any part, the whole construction then must turn out faulty-shelving and askew, leaning to back and front, incongruous, that now some portions seem about to fall, and falls the whole ere long-betrayed indeed by first deceiving estimates: so too thy calculations in affairs of life must be askew and false, if sprung for thee from senses false. So all that troop of words marshalled against the senses is quite vain” (De rerum natura IV 513-521, W.E. Leonard 1916).

The systematically wrong mindset usually uses literary falsification of reality. Some manipulate speech, either with sophism, or with rhetoric, or with dialectical techniques, or with sterile obsessive logic, using ways of cheating others or deluding oneself, usually with political or self-serving purposes. Literary falsification of reality includes the ideal mythological approach of the world, the “political lie” considered by Plato as the right of people in power, the superficial commentary of the phenomena and sterile skepticism. All these verbal approaches based on the moto “mind comes first” are forms of subjectivity, idealism and intellectualism. These systematically wrong ways of thinking led the Hellenic world to intolerance and discord, and eventually to submission to Republican Rome, whose rising power came from collaboration of patricians and plebeians. These systematically wrong idealistic mentalities subsequently led mankind to the Middle Ages.

In the modern world, we may observe that subjectivity, obsessive ideologies, noncritical pluralistic chattering continue to result in barbaric disputes and inhuman fighting while the temporarily stronger prevails, according to the barbarous law of the jungle. In addition, there is the absurd misguided way of thinking, the impulsive, the “so I like it”, the variably eclectic mentality. This is usually an uncertain, shallow, and effortless way of imprudent dealing with any subject. It is characterized by lack of knowledge of reality, empty chattering, and myopic desires of the type “the purpose sanctifies the means”. An example result of this mentality is the recent decision by President Donald Trump to withdraw USA from the Paris Climate Agreement, which has sparked the outcry of many international scientific associations that called it “a dangerous denial of decision-making method based on scientific data”.

Nevetheless, there are many people against the scientific way of thinking and common sense, such as the Syndicate of Greek Electricity Workers that welcomed the Trump decision, combining unscientific nonsense and self-interest politics in an exemplary manner, since most of their jobs are still based on coal mining. Unfortunately, the nonsensical and superficial way of thinking is particularly widespread in modern societies. The Epicurean philosophy can assist its friends to combat this mentality of the many and to overcome the foolish, idealistic influences that create anxiety and turmoil. Studying and understanding Epicurean texts may help a well-intentioned reader to experience the objective, scientific and serene way of thinking of Epicurus without any misunderstandings. History teaches us that even charismatic people who did not understand the Epicurean scientific method made mistakes in their appreciation. For example, the great thinker Voltaire, who generally admired Epicurus, erroneously considered as absurd the Master’s views regarding chance and evolution in nature.

Perhaps even an intelligent person who uses merely rhetorical arguments can end up in foolish opinions, while observation and calm reasoning may lead a person of moderate intelligence to objective scientific thinking. The role of Science is not “to fight unemployment”, as an ignorant Greek High School student wrote recently in an exam. The method of Science, reminiscing the Epicurean Canon, provides the intellectual and technological resources for the liberation of thought and the pursuit of happiness of people, as was first recognized by Epicurus, the philosopher that enlightened humanity. The Re-Hellenization, which is synonymous with Humanism for the Epicureans, should be based on the education of all people in the scientific way of thinking, the objective observation of reality, the calm reasoning with ataraxia, and the friendly coexistence with the aim of the blissful civilized life.

Previous ArticlePeace and Safety For Your Twentieth of May: Better Never To Have Been Born?
Next ArticleA Single Page PDF Handout of the Fundamental Epicurean Doctrines